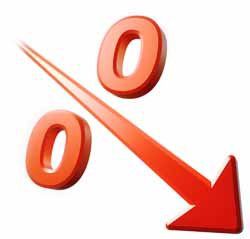 The drop in mortgage rates on Friday is being attributed to the housing data that was released at the end of the week. The New Home Sales report showed a significantly lower number on the executed purchases contracts for July than had been anticipated.  Reports indicate that the rate drop came in phases with most lenders releasing at least two rate sheets during the day.

The net effect resulted in an eighth of a point drop for the rate average, and for ideal scenarios, the best execution dropped to 4.625 percent in many cases. Some lenders continued to keep their rates near 4.75 percent as they had jumped earlier. Rates had moved higher during the last three months, but then fell again on Friday.  Some experts feared that rising rates would reduce the number of purchases. The official government figures are significantly different from the previous readings so there is little room for doubt that the rate spike has now flowed into the economic data.

The release of downbeat data has helped interest rates by informing the experts that there is a weaker economy than believed so lower growth will be supported and secondly, it shows there is not substantial ability to sustain an increase in interest rates at the present time. Rates have spiked because of the Federal Reserve is expected to begin tapering the bond buying program. The Feds have been spending $85 billion per month on bond buying as part of a stimulus effort to keep interest rates low.  Many believe tapering could begin as early as September with the program completely ending next year. The result has been higher mortgage rates.

Experts and analysts are awaiting a Sept. 18 announcement from the Federal Reserve that they believe will clarify when the bond buying program will start to taper and the spending on bonds will be reduced. Experts have indicated Friday’s rate shift does not signify a long term change in rates and those planning to lock in rates should do so immediately. Last week mortgage rates, although remaining historically low, reached a two-year high. According to analysts, the market is still very volatile and could spike again at any moment.