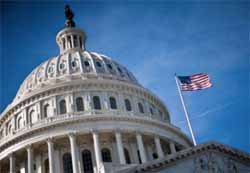 Congress voted to pass legislation on Friday that would fund federal agencies from Oct. 1 through Dec. 15, avoiding a government shutdown. However, the legislation would defund Obamacare, throwing the affordable health care act off track. Democrats had warned the Republicans that they would not pass the legislation if Obamacare was defunded.

In a partisan vote of 230-189, the legislation passed the Republican controlled House and was sent on to Senate, where the Democratic Party holds the majority of seats. It has been said that Senate will attempt to remove the Obamacare provision and send the spending bill back to the House to get a different version of the bill passed before Sept. 30 to avoid any government shutdowns that are set to begin the following day.

President Obama has said he will not agree to any legislation that defunds Obamacare, also known as the affordable health care act. Many Democrats have said the same, so a government shutdown is very possible if the two parties cannot reach a compromise regarding the matter.

During the last few years, Republicans in Congress have voted 42 times to either kill or make significant changes to the president’s health care reforms, which are designed to help provide medical insurance to millions of people across the country. Despite the non-passage in Congress, the measure has passed Senate, with the Senate ignoring the Republicans in the House.

This time, the House has attached the measure to a “must-do” bill that is designed to fund numerous government agencies in the fiscal year that begins on Oct. 1. If the House and Senate do not come to terms by that date, these agencies would have to stop operations until the legislative dispute gets resolved.

The bill is expected to go before the Senate for debate next week, which would keep strict, across-the-board spending cuts that were enacted as part of the 2011 deficit-reduction law. There is a need to quickly reach an agreement on a spending measure as the deadline nears. Congress is also disagreeing over separate legislation that would raise U.S. borrowing authority limit, also known as the debt limit.