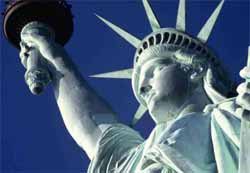 While media outlets have used video images to show the effects of a government shutdown with photographs of barricades around well-known national parks and monuments, a closer look reveals a strong possibility that the government is deliberately choosing its closures to result in maximum shock value.

Earlier this week, a group of World War II veterans attempted to visit the World War II Memorial on the National Mall in Washington DC. When they arrived they were shocked to discover barricades had been placed preventing them from walking in the area, despite it being in the open air. It has since been revealed that the group specifically contacted government officials and they were told in no uncertain terms they would not be allowed to enter. One park official was quoted as saying, “it’s a government shutdown what do you expect.”

Other well-known closures involve the Statue of Liberty, as well as the World War I Memorial.

While one would think based on these images that all national parks and tourist attractions were closed, however it turns out that the Park service continues to operate many lesser-known places at the expense of these more prominent monuments that are the favored destination for tourists.

Parks around the DC area that have little to no visitors are being kept open, while other well-known attractions such as the Statue of Liberty are closed. This is occurring despite the fact that the Statue of Liberty charges a fee for those wanting to visit and that by targeting the closures, they are actually deliberately shutting down the exhibits that would bring in the most revenue during the shutdown all for the purpose of causing inconvenience and pain to tourists.

The Park service has even gone so far as to close down parks that receive no federal funding and thus should be unaffected by the shutdown. Mount Vernon, the home of first president George Washington has remained a private non-profit for over 150 years and is owned by the Mount Vernon Ladies Association which receives no federal funding.

Indeed, the attractions official website reads “NO SHUTDOWN HERE – The Federal government may be shut down, but Washington’s home remains open. Mount Vernon has remained a private non-profit for more than 150 years.”

However, the parking lots do not require any attendance and they are currently well maintained and need no immediate attention. As such there is no reason for the parking lot to be closed.