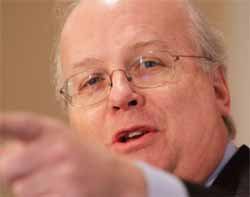 The Tea Party and Tea Party sympathizers are perceived to be a vocal minority in the Republican Party, and are perceived as not much but a bothersome fly on the windshield of the establishment. And perhaps one of the most vocal GOP “cannibalists” in the party is former George W. Bush adviser Karl Rove, who is unapologetic about his support for establishment, career GOP members of the House, Senate, and White House candidates.

Rove has always been one of the more vocal opponents of the Tea Party and its stance on smaller government and fewer taxes, and he has always maintained that a moderate GOP candidate can win a national general election, and that a conservative candidate is not the best choice for America.

Never mind that “moderate” candidates have won just three presidential elections since 1988 – and those were against candidates that were known to be more liberal (G.H.W. Bush over Dukakis in 1988; G.W. Bush over Gore in 2000 and Kerry in 2004). In every other election where a “moderate” GOP candidate was not considered “more conservative” than the Democrat, the Democrat won.

But Rove is on the warpath again, making a bold prediction that at the end of the day in the 2014 election cycle, the GOP will win the Senate and keep the House – but that most of the “establishment” GOP candidates and incumbents will win and the Tea Party-backed conservative candidates will generally come up short in their bids to unseat incumbents or more moderate, established candidates.

Rove made the prediction in a recent blog post that turned into a Wall Street Journal op-ed piece. Rove did write the piece in such a way that even if the Tea Party did win the majority of the primaries in the GOP, his prediction would still come true. We’re not sure how, either, but Rove apparently takes great pride in being clairvoyant and ensuring his predictions are bold but proven right.

He does concede that there are and will be a few vulnerable big-business GOP incumbents who will likely be defeated in this election cycle, but he makes the prediction that the Republican Party will win about five more House seats to extend the majority and may win six Senate seats to have 51 and take the majority position in that chamber for the first time since 2006.

But he, like many other establishment GOPers inside the Beltway, thinks that limited government does not sell in America. Does the Tea Party, and the country itself, have something to say about that?

David Woodburn has a professional writing and editing career that spans 20 years and includes coverage of sports, local politics, transportation and economic development issues. He has won state press awards for feature and headline writing, and owns a bachelor's degree in journalism and a master's in English from Northern Arizona University in Flagstaff, Ariz. He has been a freelancer since 2005.