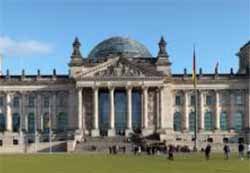 Germany’s elections, set to take place on Sunday, are expected to largely turn on the stability of the country’s economy; Chancellor Angela Merkel’s handling of European debt crisis and social issues such as women’s role in the workforce. However, it now appears another issue may have a bearing on voter’s decisions as they fight back against those in the government who want to tell them what to eat.

Polling suggests Germans appear poised to punish the Green Party for its urging that public cafeterias go meat-free each week on a designated “Veggie Day” in order to help the environment and reduce cruelty to animals.

At her party’s final campaign rally on Saturday, Merkel joined in with others in slamming the Green proposal.

“You will never hear from the Christian Democratic Union party when you should eat meat and when you shouldn’t,” Merkel said to loud applause from her supporters and campaign workers in the Tempodrom theater.

“I grew up in a Christian house. We didn’t eat meat on Fridays. I think every restaurant should have a vegetarian dish, but we are a party confident people can manage their own lives,” the German prime minister added. “We are confident people will live a reasonable life and we don’t want to deprive them of this opportunity.”

While it might appear to be an easy shot for Merkel to take at the opposition and intended to score political points, there could be more to it than simply criticizing an opposition party. Merkel had spent 45 years under communist rule and as such, appeared to chafe at the idea of the state intruding into decisions as personal as what food a person chooses to eat.

Germans appear to be rather cool to the Green Party’s Veggie Day idea. Earlier this year the party consistently polled in double digits, frequently around 15% to 16%. However, since news of the Veggie Day proposal broke in August, the party’s following dropped to as low as 9% in some polls.

As such, there is and was no chance of a Green becoming prime minister this year. However the drop in support may boost the other parties and diminish the chances of a coalition government involving Merkel’s CDU and the Greens.

While the Veggie Day issue has inspired a backlash, it is far from the only credibility problem the Greens have with German citizens. In the 1980s the party entertained the possibility of legalizing pedophilia, which gave an extensive negative press attention during the election campaign additionally, her signature issue does not appear to resonate with the German people either, with some voters blaming them for high electricity prices.