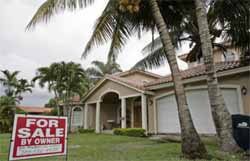 With the rapid increase since September in housing costs and foreclosures in the US and China, foreign experts predict that the housing market may burst soon. In China, prices in housing reached around 11 percent in comparison to last year, and in a year, prices increased almost 13 percent for the US. This echoes 2007, when experts predicted the same thing, leading to the economic recession. So, why has there been little action to curtail another crisis? Will there be another housing bubble burst?

Valery Garbuzov, Deputy Director of the Institute for the USA and Canada, shares his thoughts about the issue. “Generally speaking, home sales have always been an indicator whether the economy grows, or remains in stagnation after the crisis.

A rise in housing prices, activation of the housing market, increased demand for housing, was always seen as a positive phenomenon. But on the other hand, all this is very much linked to mortgage and the development of mortgage. Again, there will be a crisis, caused by this disorganized, unregulated mortgage lending. At the same time, the situation in 2008 cannot copy itself. Most experts agree that the amount of positive news in terms of the real estate market outweighs the risks.”

He continues, “It should also be remembered that the state does not have many ways to affect the market and economy. Basically, it is the Federal Reserve System, which, by increasing or lowering interest rates, can affect economy and either lower or raise the purchasing power of the population, enhancing economic activity The state, of course, should stimulate demand, although it is difficult to do.

This is evidenced by the growing federal budget deficit of the United States. But there is hope that the market will work a normal way, and then this situation will recover over time.”

“Every success has its price, and in this case, the success of the revitalization of market demand, as well as the price of success implies the risk of the mortgage crisis to strike again. It may or may not be. Optimists hope that it will pass them by,” he concludes.

L.J is a contributor covering financial, entertainment and politics news. A freelance writer for various online publications with a great interest in real estate investment.