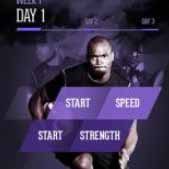 Peterson said he agreed to make the app to share his strategies to other athletes. He reiterated that the fitness training was based on a program that has helped him fully recover from a recent knee injury. The football star disclosed that he experienced challenges in making this new app because it was somehow ‘intense.’

The Adrian Peterson workouts were designed to get more physically challenging as the athlete becomes stronger and faster. It comes as a package with daily workout routines and content coming from Peterson himself. There are also ways to track users’ progress, which would serve as basis for program updates.

Peterson incurred damage to his anterior cruciate ligament (ACL) on December 2011 during a game. Surprisingly, he won the coveted most valuable player award eight months later when he played for Minnesota Vikings.

That is why many sports enthusiasts and fellow athletes are curious to find out the kind of training he adopted to recover from his serious knee injury in just a short time. In a statement, Peterson said he intends to inspire aspiring and professional athletes to give them hope that they could still improve their football skills.

Because most of their clients were busy celebrities and professionals, the Saladinos then created an app that would upload workout programs. The aim was to make their clients access and retrieve those programs even if they are travelling or on the go.

It was in 2011 that the brothers realized that the app could possibly be offered to more consumers. Thus, Driven Apps was born. Since then, the company has aimed to hire top-tier athletes, who would co-produce branded sports training apps for the masses.