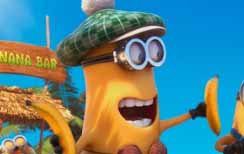 Record producer and singer Pharell Williams is all over the music charts these days. His collaboration with recording artist Robin Thicke has proven to be a success through the chart-topping track ‘Blurred Lines.’ The same goes for ‘Get Lucky,’ his song with Daft Punks and ‘Get Like Me,’ a collaboration with Nelly featuring Nicki Minaj. Now, the four-time Grammy Award winner is set to make a new wave in music through the soundtrack of the upcoming movie ‘Despicable Me 2.’

Williams co-produced ‘Despicable Me 2: Original Motion Picture Soundtrack’ with Heitor Pereira. Back Lot Music released it last June 18. He composed and recorded three original songs for the CD. Those are ‘Just a Cloud Away,’ ‘Happy,’ and ‘Fun, Fun, Fun.’ His composition ‘Despicable Me’ is still part of the soundtrack, after being included in the first album. Meanwhile, his other song ‘Scream’ was recorded for the album by Cee Lo Green.

The day after the release of the album, the producers decided to release an official video with lyrics for his song ‘Happy.’ It served as a drumbeater for the upcoming release of the film on theaters across North America on July 3. The song was first heard over the radio in May. Williams has already performed it live in several of his TV appearances, including his recent visit at the ‘Jimmy Kimmel Live.’

When interviewed by selected reporters during the red carpet premiere of the movie, Williams expressed his gratitude for being offered by movie producer Chris Meledandri the opportunity to work for the soundtrack album of the animated sequel. He considers it a blessing to work for the soundtrack of the movie for the second time since its original was released in 2010. This time, he partnered with fellow music producer Pereira, to effectively score this adventure animated film.

Williams consider himself lucky for being given the chance to work for the movies’ soundtrack twice. He assures the public that the soundtrack is full mostly of positive tracks. The CD, which contains 24 regular and short tracks, is now commercially available in record stores. Downloadable copies are also available online through various online music stores.