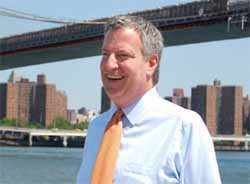 “I think the mayor is right and I would continue the legal process. We have to, of course, look at the specifics with our own lawyers to handle the mechanics, but there’s no question I want to see this rule go through,” the front-running candidate told reporters at a rally with Chinese-American supporters.

Mayor Bloomberg’s proposed ban on sugary drinks larger than 16 ounces was struck down by a lower court earlier this year. However, the administration appealed the decision to the state’s highest courts, which agreed to hear the appeal.

The mayor and the city council have attempted to ban numerous food items that they feel are unhealthy and want to restrict a person’s right to eat and drink certain items.

Bruce Vladeck one of the board members believed they should consider forbidding movie theaters from selling large containers of popcorn. “The popcorn isn’t a whole lot better than the soda,” he said. He,, Ida

Another member believes that milk drinks should also fall under the size limits. “There are certainly milkshakes and milk-coffee beverages that have monstrous amounts of calories,” Dr. Joel Forman said.

Bloomberg has defended the ban saying the government has a responsibility to prevent people from becoming obese.

The ban has become the subject of ridicule in the blogosphere and on talk radio with critics calling it a nanny state.

De Blasio said he agrees with Bloomberg’s position that the ban would help fight childhood obesity as well as prevent other health issues in the city.

“Right now it’s hard to be a parent in New York City. I have two teenagers, I’m surviving the experience, and Chirlane and I spent a lot of time working to make sure Chiara and Dante are healthy. That means encouraging nutrition, that means encouraging exercise. But, you know, it takes a lot of energy to keep on top kids and make sure they do the right thing,” Mr. de Blasio said. “Unfortunately, as parents, it feels like every day we’re fighting an enemy and that is the growing availability of bigger and bigger sugary drinks.”