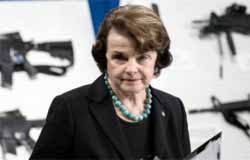 Earlier this year while the Senate was debating draconian gun control measures in the wake of the Sandy Hook school massacre, California Sen. Dianne Feinstein, a Democrat who has said she desires to ban all private firearms, acquired “assault weapons” as part of a display that she used as a backdrop to highlight how scary looking the weapons were.

The problem is according to DC law it was illegal for anyone, including lawmakers to possess such weapons. Newly released information by the Washington Post reveals that Lanier not only ignored Feinstein’s breaking of the law, but actively worked at getting her the weapons.

The information came in response to a Freedom of Information Act request that revealed Chief Lanier’s shocking willingness to bend the rules for obvious partisan and ideological purposes.

On Christmas Eve of last year, lobbyist Chuck DeWitt e-mailed Lanier saying, “Sen. Feinstein has asked us to bring examples of assault weapons used in the worst incidents over the past few years.” The CEO of the Lafayette Group told the chief that the guns would be put on display at a media event and asked, “Could you put me in touch with your person who would have any of these weapons?”

While chief Lanier’s response has not been turned over, a week after DeWitt’s request, Tom Mentzer, Feinstein’s Press Secretary asked the commander of the local Crime Scene Investigation Division, Keith Williams if he would be able to provide 10 specific firearms models used in high-profile mass shootings, including a Bushmaster XM-15, Tec-9 handgun, Smith & Wesson M&P15 and a Glock 19 with a “high-capacity magazine.”

Williams was able to eventually get the weapons Feinstein requested. Additionally, Chief Lanier wanted to help Mrs. Feinstein; however she did not want the media to know. Williams e-mailed Mentzer to put a “bug” in his ear that the police would “prefer that no mention of the fact that the weapons came from D.C. or were recovered by MPDC in the official language or speeches.” Mr. Mentzer replied, “By not mentioning where the weapons came from, we open ourselves up to the same charge against David Gregory.”

The Gregory comment was a reference to the NBC anchor from “Meet the Press” who knowingly also violated DC law by procuring an illegal 30 round magazine in the district as a stunt for his TV show. However despite this clear violation of the statute, Gregory was never charged.

But the department’s willingness to ignore gun laws do not appear to extend to pro-Second Amendment advocates. The week after Feinstein’s display with the illegal weapons, Republican Sens. Ted Cruz and Lindsey Graham asked for permission to bring a hunting rifle alongside of an AR-15 style rifle as a rebuttal to Feinstein’s claims. However, there request was refused.