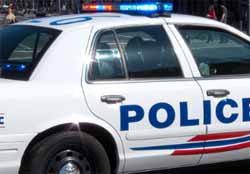 In another example of how Washington D.C. police selectively enforce the city’s gun laws, Mark Witaschek, a successful financial advisor with no criminal record, is now facing two years in prison for possessing unregistered ammunition which included a brass casing after DC police raided his house looking for guns.

D.C. law requires all residents to register every firearm with the police, and only registered gun owners are allowed to possess ammunition which include spent shells and casings. The maximum penalty for violating these laws is $1000 fine and a year in jail.  Mr. Witaschek has never had a firearm in the city, however despite this he is being prosecuted to the full extent of the law. His trial starts on Nov. 4.

On July 7, 2012, the police banged on Witaschek’s Georgetown home at 8:20 PM to execute a search warrant for “firearms and ammunition… gun cleaning equipment, holsters, bullet holders and ammunition receipts.”

After entering the house, the police immediately went upstairs and pointed guns at the heads of Witaschek and his girlfriend, Bonnie Harris, demanding they surrender, lay face down and be handcuffed.

Recalling the incident, Witaschek became visibly emotional and upset while describing how police treated not only him, but Ms. Harris and the four children in the house. When police arrived, his 16-year-old son was in the shower.

“They used a battering ram to bash down the bathroom door and pull him out of the shower, naked,” said his father. “The police put all the children together in a room, while we were handcuffed upstairs. I could hear them crying, not knowing what was happening.”

While the police did not find any guns in the house, they wrote on the warrant that for items were discovered: One live round of 12-gauge shotgun ammunition,” which was an inoperable shell that misfired during a hunt years earlier.  Witaschek had kept it as a souvenir. “One handgun holster” was found, which is perfectly legal.

“One expended round of .270 caliber ammunition,” which was a spent brass casing. The police uncovered “one box of Knight bullets for reloading.” These are actually not for reloading, but are used in antique-replica, single-shot, muzzle-loading rifles.

Local prosecutors have decided to press charges against Witaschek, which could result in him doing two years in prison.

Critics of the D.C. police have said this is another instance revealing how law enforcement officials are selectively enforcing laws against otherwise law-abiding citizens, while giving a pass to liberals who flagrantly violate the same laws.

Earlier this year, when NBC news anchor David Gregory violated the gun registration law by wielding an illegal 30 round magazine on live television, he was not arrested. Instead the office of Attorney General of the District of Columbia, Irvin Nathan, said he had no interest in prosecuting Gregory because doing so “would not promote public safety.”