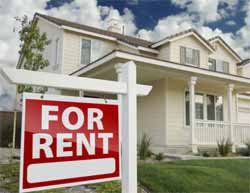 The cost of rent is on the rise, up nearly 4 percent from last year’s prices, according to reports. Larger cities, such as Houston, Miami, and Boston, have seen significant increases. Analysts believe a large number of foreclosures have resulted in the need for more people to rent, which is driving up the immediate demand for rental properties.

The price of rent has shot up for all residential properties, such as apartments, duplexes, and even houses. Home prices have been increasing in recent months, showing that the housing market has been picking up steam. Many people who lost their homes due to foreclosure, and they cannot afford to purchase another home at this time.

During the recession, several families moved in together to cut costs. Now that the economy seems to show some improvement, some of those families are going their separate ways. As the families move out from their joint dwelling, there is the need for a rental property. Some cities say that rental housing is becoming scarce to find.

Experts expect the numbers that show multi-family housing figures will indicate an increase in building projects, as the number of apartments, townhouses, and other rental properties continue to be in demand. In the meantime, rent prices will continue to climb, putting a real pinch on those who were beginning to think they were reestablishing their financial footing.

Other concerns include large number of workers furloughed during the government shutdown. While the federal government has already furloughed some 800,000 people, government contractors have now begun placing workers on furlough. Depending on how long the shutdown lasts, there could be an influx of people who start facing challenges in making mortgage payments. In turn, those people would start looking for rental properties.

With the cost of rent rising faster than the cost of inflation, that could present additional challenges to the economy. People will be paying a larger portion of their paycheck for their housing needs, leaving less money for savings and for other expenses. Experts have pointed out that it is not uncommon to see a list of people advertising that they are looking for rental properties, instead of listings of available rental properties in some towns.

In the meantime, as demand climbs, many expect to see rental prices to go even higher. For those who are looking to rent, it will just become more and more difficult to find a place to live.