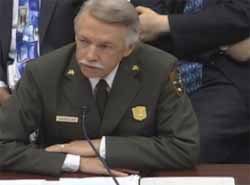 National Park Service Director Jonathan Jarvis received an earful from Rep. Trey Gowdy (R-S.C.) over the apparent double standard between how he treated Occupy Wall Street protesters who trashed the facilities on the National Mall compared to the shoddy treatment by World War II veterans simply desiring to view their Memorial which was paid for with private funds.

During the hearing, Gowdy was relentless in his challenge to Jarvis asking him to cite the regulation that motivated his department to put up barricades to keep veterans away from war memorials on the first day of the shutdown, despite this never happening in any of the previous government shutdowns. As part of his grilling, Gowdy noted that when protesters with Occupy Wall Street decided to camp out at Washington DC’s McPherson Square for 100 days, in clear violation of federal regulations, the Park service failed to issue a single citation.

However, during the shutdown the Park service has had no qualms about issuing citations to Americans in the parks, including joggers as well as hikers who crossed barricades.

Jarvis attempted to complain that the comparison was unfair saying of the Occupy event “that was two years ago.”

However, the regulation from two years ago has not changed, prompting Gowdy to ask why he felt the World War II veterans were different.

Jarvis refused to give a straight answer, however he did admit issuing the closure order.

“On the very first day of the closure, I implemented a closure order for all 401 national parks in compliance with the Anti-Deficiency Act,” Jarvis replied. “And immediately, that day, also included, as a part of that order, that First Amendment activities would be permitted on the National Mall.”

The statement did not impress Gowdy who snapped back, ““Do you consider it First Amendment activity to walk to a monument that you helped build, or is it only just smoking pot at McPherson Square?”

Jarvis then replied that the veterans would have been allowed to visit the memorial if they had simply “declared” they were exercising their First Amendment rights.

However, Gowdy replied with the barricades up and no park officials present, just who were the veteran supposed to declare their intentions to.

“Who were they to declare it to? A barricade?” Gowdy responded sarcastically. “Mr. Chairman, I want the record to reflect that no statute or code of the federal regulation was cited to justify the erection of barricades.”