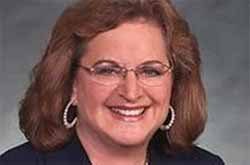 State Senator and Democrat Evie Hudak resigned on Wednesday in order to prevent the likely notion that she would have lost her seat in a special election in the future. Hudak is a major proponent of tougher gun laws, and this fact had made her a prime candidate to be ousted in a recall election.

“Though it is difficult to step aside, I have faith that my colleagues will honor the legacy my constituents and I have built. I am thankful to my fellow legislators who have been so supportive in recent weeks, standing by my side and encouraging me to keep fighting,” wrote Hudak in her letter of resignation to the Secretary of the Senate.

Hudak’s resignation may seem like a victory for gun owners in Colorado, but it actually prevents a Republican takeover of the state senate. Had a Republican replaced Hudak in a special election, Republicans would have gained control of the upper legislature.

Now that Hudak is resigning, the Democrats can appoint her successor. This will help them to hold onto their one-seat majority.

In September, former state senators John Morse and Angela Giron were recalled in a special election. This fact is what worried Hudak into deciding to step down. She is sacrificing her political career to save her party from losing the senate.

Hudak was not apologetic about her views on gun control though, stating, “Most Coloradoans believe that going through a background check is a reasonable thing to do if it means we can keep guns out of the hands of violent criminals. Most Coloradoans believe that the convenience of high-capacity ammunition magazines is less important than saving lives in tragedies like Sandy Hook, Aurora and Columbine.”

If Hudak really believes that the majority of Coloradoans are on her side, she would not have resigned on Wednesday. She won her last election by less than 400 votes, and was certain to lose any recall election facing her.

The successful recall of Morse and Giron was a warning to Colorado legislators that the people of the state will not stand for laws that infringe upon their constitutional right to bear arms.

Recall organizers attempting to remove Hudak from her seat stated last week that they had 92% of the signatures needed to trigger a recall. They needed 18,900 valid signatures to present to the Secretary of State’s office by next week.

None of these figures matter now, as Hudak has successfully managed to completely remove the chance of a recall, and in doing so, saved the Democratic Party from an embarrassing loss of the state senate.