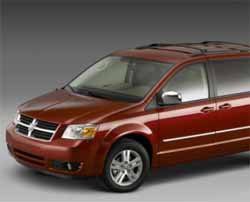 Supplier sources have said that Chrysler Group LLC has plans to extend the production of several of its higher end vehicle lines for up to several years.

The Detroit News reported that their sources are saying that the company has made a decision to extend production of the Dodge Avenger until the end of 2015 as well as extend the current generation Jeep Wrangler until mid-2018 and keep building the Dodge Grand Caravan through late 2017.

Chrysler had previously planned to replace the Avenger in January and the Wrangler in mid-2016. The Grand Caravan was due to be replaced with a new version in mid-2016, however the program has been cancelled, suggesting that the Chrysler Town & Country could be the sole minivan produced by the company at its Windsor factory.

CEO Sergio Marchionne would not comment on the extension of the product lines, however, he did confirm Chrysler will be building only one minivan.

“We’ve made no announcement to that effect,” Jodi Tinson a spokeswoman for the company said.

While the company is keeping its decision under wraps, Jim Hall of 2953 Analytics LLP said the move, if it were to occur, actually makes sense for the company.

“It’s exactly what they need to do. They need to focus on things with volume,” he said. “When you find your consideration is increasing, you want to cash in with high-volume vehicles — not a bunch of niche vehicles.”

Hall went on to tell the News that with Chrysler having trouble launching new vehicles the company wants to focus its energies on ensuring it gets it right for critical high volume cars like the replacement for the Chrysler 200 that is due out next year.

According to Hall, keeping the Avenger and Wrangler is a no-brainer as both vehicles are selling well and the autos are doing so with a minimal marketing campaign.

He went on to explain the auto manufacturer is having problems with other product lines besides the replacements for these three vehicles.

The Challenger replacement, the Barracuda, just got pushed back a while, too,” Hall said. “Even with it, they’re going to be the third player in a three-car field.”

The company is in the midst of an expansion in anticipation of increased sales. Recently Chrysler publically unveiled a new state of the art paint shop that will encompass 898,000 square feet and be able to seal, coat, powder and paint an entire vehicle using advanced robotic systems in about eight hours.