Television has been the steady diet of home entertainment for Americans ever since the box made its way into the living room after World War II. However, latest statics suggest that the dependable business model of Cable TV companies such as Comcast Corporation (NASDAQ:CMCSA) [stockdata ticker=”CMCSA”] may not be viable in near future.

Although cable companies like Comcast (NASDAQ:CMCSA) [stockdata ticker=”CMCSA”] and Time Warner (NYSE:TWC) [stockdata ticker=”TWC”] has steady new subscribers, the ground is shaking underneath for the long-term revenue sustainability of these companies. According a CNET study, younger TV viewers are opting out from broadcast TV subscriptions and getting their daily dose of video entertainment from online sources. Back in early 1990’s the average age of ABC’s TV program viewers was around 37, fast forward twenty years, now it’s 51. Average age of Fox’s viewers has surged to 44 from 29 during the same period. While NBC and CBS had traditionally rather old aged viewers, they are also observing the age of their average viewership going up in numbers.

One may ask the reason, and a metaphorical comparison would be that most people growing up in 1990’s watched Friends on a TV set while the audience of How I Met Your Mother perhaps picked to watch it on their Laptops in their dorm rooms. Since Apple (NASDAQ:AAPL) [stockdata ticker=”AAPL”] TV came out and Google (NASDAQ:GOOG) [stockdata ticker=”GOOG”] followed suit with its Google TV, people still prefer to use a TV. However, the rise of NetFlix (NASDAQ:NFLX) [stockdata ticker=”NFLX”] and Hulu in recent years have blurred the allotment between watching shows, movies and videos on the computer screen and on a big screen TV set.

According to Marketing Charts, US broadband penetration has reached over 70 percent in 2013. This signifies why a very new company like NetFlix (NASDAQ:NFLX) has a US$ 19.98 Billion market cap compared to a time tested company like Time Warner Cable Inc (NYSE:TWC).

Comcast’s Gross Profit Margin (70.36%) has helped its stock price to perform relatively better since 2012, compared to Time Warner, perhaps because it actually owns a 32 % stake of Hulu, one of the major players of online video entertainment. 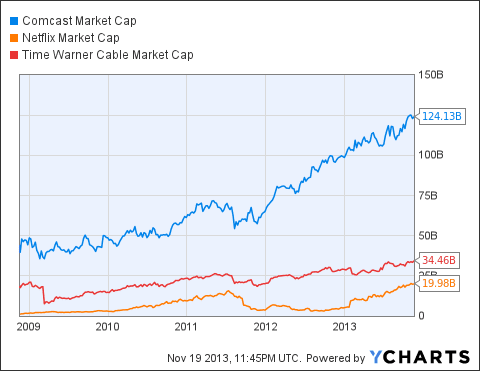 However, the bulk of its revenues is coming from subscribers who are not part of the Generation Y or the Millennials. Within next decade majority of the workforce will be dominated by people from this demographic, and they will be using fast broadband access to watch their favorite TV shows not on a cable TV subscription. While the current financial ratios suggest that Comcast and the cable TV industry is doing well, it is also suffering from a marketing myopia that they are in the Cable TV business; making them vulnerable to the changing behavioral patterns of a new emerging generation.