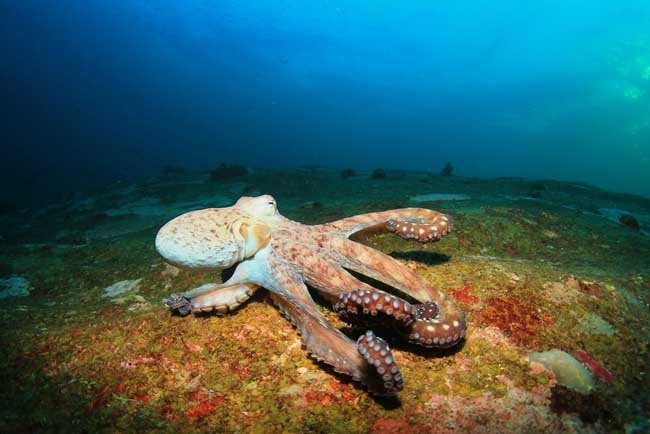 Until recently we knew that cephalopods, like octopuses, are famous for their ability to change the color and pattern of their skin, both to protect themselves from their enemies and to communicate with each other based on their eyesight. New studies came to light to reveal that cephalopod skin is possibly sensitive to light.

Desmond Ramirez and Todd Oakley from the University of California, Santa Barbara, USA, explain that octopuses gather information about their location using their eyes and then send signals to the pigmented chromatophore organs in their skin in order to change their body color. After a thorough research in relative bibliography, Ramirez detected two interesting reports describing how the chromatophores in biopsies of squid and octopus skin respond to light without the contribution of the eyes or brain. This startling fact was the motivation to start the study.

In the meantime, Alexandra Kingston and Thomas Cronin, two other researchers from the University of Maryland, Baltimore County, USA, were also thinking about the possibility that cephalopod skin may be sensitive to light. They were aware of the fact that non-visual opsins are produced in the skin of various animals and humans, but they cannot work for camouflage. Their use is to prevent skin damage through the tanning process. These proteins are similar to the opsin proteins that sense light in eyes. So, both teams tried to identify key elements to connect the light-sensing mechanism found in eyes with the corresponding one in the skins of octopus, squid and cuttlefish.

In order to figure out how the Octopus bimaculoides (two-spot octopus) uses its skin to detect light, Ramirez made an experiment after isolating the octopus’ skin and brain. In the beginning of the process, Ramirez shone white light on a sample tissue and he observed that the colour-changing chromatophores expanded and changed in hue. Then, when Ramirez switched off the white light, the chromatophores contracted and the skin returned to its original color.

The scientist used this method to measure the time it took the chromatophores to expand and to change the skin’s color, based on a range of light from violet to orange. He discovered that the swiftest response was the 480 nm light (blue). This wavelength of light is the same that the octopus’s eye responds the most. When Ramirez and Oakley tested the skin for opsin expression, they discovered expression of rhodopsin genes in sensory neurons distributed on the mantle surface.

The Mirror reported on Thursday that researcher Desmond Ramirez said: “Octopus skin doesn’t sense light in the same amount of detail as the animal does when it uses its eyes and brain. But it can sense an increase or change in light. Its skin is not detecting contrast and edge, but rather brightness.”

Kingston and Cronin tried to identify elements of the molecular mechanism that are necessary for converting light detection into a behavior. So, their research was focused on searching for key proteins, like rhodopsin in the skin of the common cuttlefish, the broadclub cuttlefish and the longfin inshore squid. Indeed, the pair of scientists not only discovered rhodopsin and other proteins essential for the light sensing in the animals’ skin in the skins of both cuttlefish and the squid, but they also suggested three possible mechanistic scenarios for the way squid chromatophores sense the light and respond to it.

In conclusion, both teams have proved that cephalopods may have adapted the cellular mechanism that detects light in eyes for light sensing in skin.