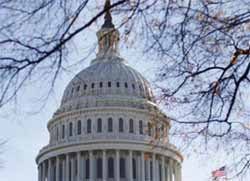 Unless jobs creation is part of the bill, House Speaker John Boehner says he will not bring any Unemployment benefit extension bill to the floor of the chamber for debate. That leaves the current Senate Unemployment Extension Bill dead in the water.

Speaker Boehner yesterday said that a piece of legislation backed by Nevada junior Senator, Republican Dean Heller, passed earlier this month by the Senate does not meet his earlier demands. Boehner wants a bill that both pays for itself, (the Senate bill does,) and offers measures for job creation. The Senate bill does not.

According to Michael Steel, Boehner’s spokesman, the results of the telephone call yesterday between Heller and Boehner was no surprise. “The speaker … told him [Heller] the same thing he has told the White House since before Christmas: We are willing to look at a plan that is paid for and includes something to help create jobs,” said Steel.

According to Steel, the House is currently working on legislation that would provide long-term job creation, a major sticking point in the latest Senate bill.

While sympathetic to the plight of unemployed Americans, House Republicans are committed to taking a big-picture approach that will create more and better jobs for the 2.3 million Americans who are looking for work. While the economy appears to be adding jobs, most of the jobs being created today are insufficient to support the middle-class families at the center of the unemployment extension debate. House Republicans appear unwilling to compromise on their big-picture approach.

According to a story that ran in the National Journal earlier this month, there are three times as many people looking for work as there are jobs available, a number that remains unchanged since January. Moreover, the nation is adding about 72,000 workers to the unemployment rolls each week. What makes the situation even more dire is that workers who have a long gap in their work history, as do those who lost their employment at the onset of the Great Recession have greater difficulty snagging the available jobs than do those who have been out of work for shorter periods, creating an entire subset of unemployed workers whose desperation is mounting.

On Tuesday, House Ways and Means Committee ranking member Sander Levin, Democrat from Michigan, sent a letter to House Speaker John Boehner that included stories of Americans who have been cut off unemployment benefits because of the program’s expiration on December 28 of last year. The stories are heart-breaking, but leave Boehner obviously unmoved.