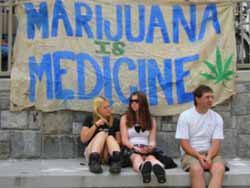 Two groups who most people would assume to be allies are now squaring off against each other in an attempt to protect their turf as pot legalization activists are now facing opposition not from anti-drug lawmakers, but big marijuana.

Currently, the debate over legalizing marijuana falls into several camps. First, there is the camp that wants to keep all marijuana usage illegal. These individuals frequently say that among other things, marijuana usage is a gateway drug to other harmful and more addictive drugs such as cocaine and narcotics.

On the other hand, there are those who advocate for the total legalization of marijuana for any use including recreation. These individuals claim that just as with alcohol, the state or federal government has no business criminalizing a behavior that should be a personal choice. They also frequently claim that the government could stop spending billions of dollars in the war on drugs and instead make money by taxing the product similar to what is currently done with cigarettes and alcohol.

The final position falls in between the previous two by advocating for the legalization of marijuana for medicinal purposes. They claim that marijuana offers pain relief benefits that people cannot obtain from existing pain drugs on the market.

Recently, Colorado and Washington State have passed laws legalizing recreational marijuana use. In Colorado, the product is intended to be taxed to help fund education.

As supporters of legalizing marijuana are gearing up to legalize the product and other states as well as repeal federal laws that currently prohibit marijuana usage, they are running up against an interesting opponent.

However, like any entrenched business, members of the medical marijuana industry are attempting to exert their influence to essentially maintain a monopoly status on the sale of its product by shutting competitors out who would open dispensaries to sell the product to adults for any reason whatsoever.

This attempt to retain their edge in the marketplace has placed the medical marijuana industry up against fully legalization advocates hoping to ride the momentum from legalization efforts in Colorado and Washington to other states in 2016.

However, earlier this year the Medical Marijuana Caregivers of Maine stunned marijuana legalization supporters when they joined forces with the traditional coalition of anti-pot forces involving law enforcement groups, social conservatives and public health advocates in opposition to a state bill that would legalize possession of small quantities of marijuana.

In arguing against the bill the medical marijuana lobby argued that by legalizing the drug criminal organizations such as the drug cartels and organized crime would begin smuggling pot into neighboring states. Additionally, they complained the bill’s tax plan was unworkable and unfair.

Full legalization advocates such as the National Organization for Marijuana say the opposition is all about the money and that those who run medical marijuana dispensaries don’t want to see any competition that would take away their monopoly on the product.