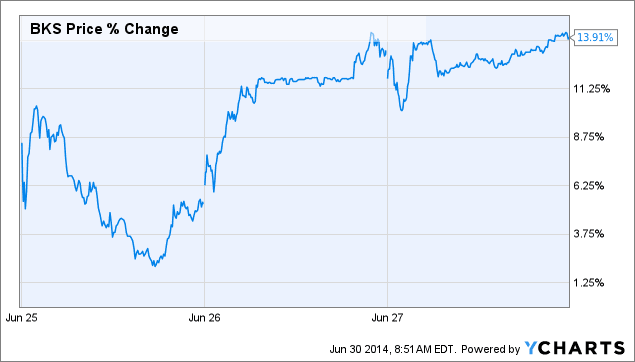 Commenting on the spinoff idea, Barnes & Noble’s Chief Operating Officer Michael Huseby mentioned that if the book retailing and digital content segments are separated, then “the businesses can achieve a more favorable capital structure and also operate at a higher level.”

Even though Barnes & Noble has poured millions in developing its Nook e-book reader and the associated digital content in the e-book platform’s library, it has been struggling to keep up sales amid the increased popularity of generic tablets and Amazon’s Kindle platform. However, Barnes & Noble’s CEO assured that his company will still offer customers a Nook GlowLight e-reader that retails for only $119. The proposed splitting of the company is likely to be completed by April 2015, within the first quarter of next year.

Current investors took the news positively as the Nook’s business was struggling. Only 11 percent of the company’s revenue is generated from the Nook segment, wrote Bidnessetc contributor Nancy Kross. Since the news came out, Barnes & Noble, Inc. (NYSE:BKS) [stockdata ticker=”BKS”]’s stock price has increased by almost 14 percent as separating the struggling digital content business will eventually help the retail business with better numbers on its balance sheet. 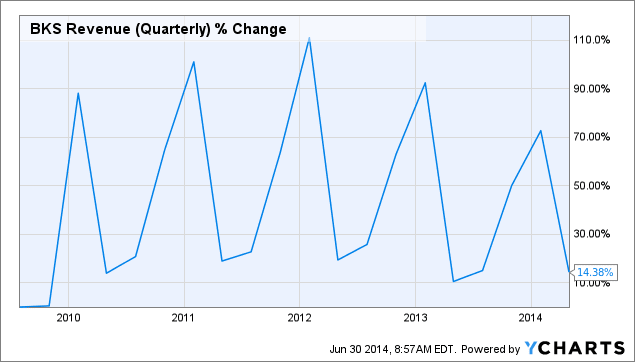 Barnes & Noble’s revenue stream has extreme seasonal influence. Its quarterly revenue always fluctuates throughout the year and goes up in the last two quarters. Based on the revenue fluctuations over the last five years over the remaining course of 2014, the company’s revenue is likely to increase up to 50-70 percent. However, from a technical point of view, Barnes & Noble’s stock price has already broken through 2013’s high and is currently trading at $23.42 per share. With the seasonal sales boost coming up and news regarding the splitting of its Nook segment, Barnes & Noble’s market prospects seems optimistic.