Year to date, Apple’s (NASDAQ:AAPL) [stockdata ticker=”AAPL”] market capitalization has increased by 13.77 percent to $569.69 billion amid recent stock buybacks from the company. Sources close to Apple revealed that the maker of the iPhone and iPad has spent around $18 billion since January 2014 to boost its market capitalization. In 2013, the company also spent $16 billion on stock buybacks. 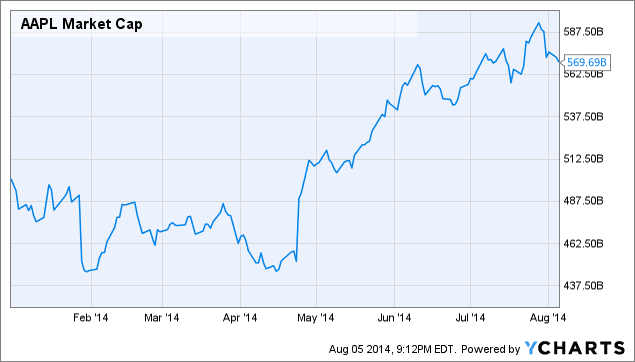 It is not only Apple doing this, but all major U.S. public companies in the S&P 500 index have spent around $211 billion on stock buybacks in 2014 to support their market valuation. It appears that major U.S. corporations are concerned that the multi-year bull market may enter a correction soon. Such speculation was re-enforced last week when major stock markets in the U.S. retreated by as much as 2.7 percent.

In the current low interest environment, companies with solid financial track records have no problem accessing “cheap money” from investment banks and funds. Instead of investing the idle funds, it seems most of the companies, including Apple, are interested in pouring funds into equity markets to bolster their financial standings as far as stock price and market capitalization is concerned.

However, investment analysts are concerned that there are better use of these funds to expand business. “There are better things to do with capital,” said Scott Wren, an analyst at Wells Fargo Advisors LLC.

Instead of investing in the core business, the stock repurchase programs instantly provide earning potential. However, these paper profits are coming from financial activity without producing anything of value. “It’s a low-quality way to increase your earnings and obviously I’d much rather see companies grow the business through revenue,” added Mr. Wren.

The problem with companies like Apple is that they have too much free cash on hand and management hardly has any clue what to do with it. In contrast, the U.S. economy has rebounded from the Global Financial Crisis and is currently growing at a rate of 2 to 2.5 percent. If Apple does not allocate a large sum in financial engineering to support its stock, investors will soon start questioning the growth prospect of the company in line with the growing economy.

In contrast to a 4.5 percent growth in Net Operating Profit After Tax (NOPAT), Apple’s cash from operations (quarterly) has gone down by 54.8 percent since the start of 2014. 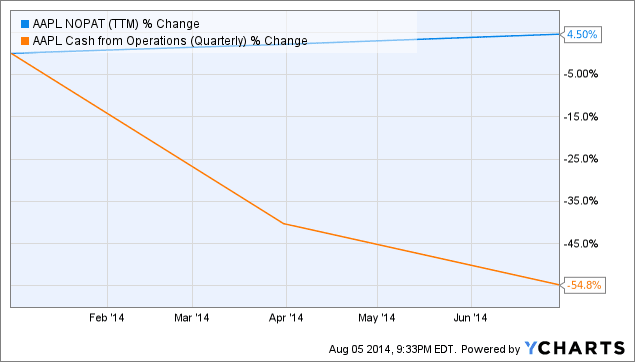 Hence, spending $18 billion on share repurchases is a good way to spend the idle cash for Apple. It makes the company appear profitable. However, without a lack of secular growth in terms of operating profit, the party may not last much longer.