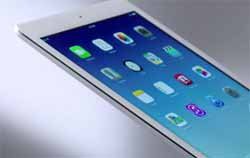 A recent report from BGC analyst Colin W. Gillis said that there was only one upside catalyst for Apple Inc. (NASDAQ:AAPL) [stockdata ticker=”AAPL”] in the fourth quarter of 2013. Gillis was responding to the Apple third quarter earnings report which came in better than expected, but failed to move the stock.

The analyst might be right about Apple’s prospects. The upside he was talking about was the company’s prospective deal with China Mobile. Apart from that deal, there seems little fundamental that is likely to move the stock considerably. Heading into 2014, there’s always the hope of the real catalyst, new products, bringing growth.

Apple Inc. (NASDAQ:AAPL) [stockdata ticker=”AAPL”] rumors have been fairly consistent about what to expect from the company’s next release. All through 2012 it was going to be a television, and sometime in the last year smartwatch rumors emerged. Those two are still the most likely, but a third product has reared its head in recent weeks.

The new iPad that Apple Inc. (NASDAQ:AAPL) [stockdata ticker=”AAPL”] Released in October was called the iPad Air. That’s more than brand consolidation, it’s a promise. Apple is likely to bring out an iPad Pro sometime next year. It’s bound to be an answer to the Microsoft Surface: a tablet that you can get real work done on.

Without taking too much time on the likely specifications of these devices, it’s important to take a look at the markets they might address, and what kind of upside they could offer Apple Inc. (NASDAQ:AAPL) [stockdata ticker=”AAPL”] shares in 2014.

The Apple Inc. (NASDAQ:AAPL) [stockdata ticker=”AAPL”] smart watch is first up. Assuming the product will be a smart phone add-on it will mainly address people who are already using an iPhone. That’s a big market, but a smart watch will not be for everyone. Unless Apple does something incredible with the iWatch, it’s unlikely to be a mass product. It will be a nice value, and margins, added piece for the firm, however.

The iTV is the product that analysts are really waiting for. They want to see if Apple Inc. (NASDAQ:AAPL) can sell a product to 30 million people a year and charge them each $2000 while keeping excellent margins. Apple might be able to revolutionize the television space, but in order to sell the product in bulk it will to come with a contract. Apple may already be considering something akin to a data plan for the living room center.

The iPad Pro will most likely be the most disappointing product for investors. Apple Inc. (NASDAQ:AAPL) will release a tablet measuring 12 inches or so, and it will probably be fantastic. It will be great for the same people that have always used the Macbook Pro: the creative professional and the wealthy.

Paul Shea is a freelance writer who concentrates his efforts on finance, economics and investing. He writes about value stocks, ETFs, hedge funds and macroeconomics. His work has appeared on Google Finance and Google News and has been cited by Barron's, Zerohedge and Businessweek. When he's not writing, Paul enjoys technology, reading, and the outdoors.