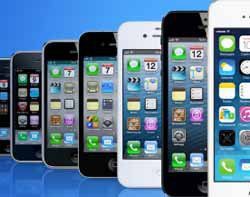 Apple Inc. (NASDAQ:AAPL) [stockdata ticker=”AAPL”] is gearing up for the biggest ever initial production run of the iPhone. Demand for large screen smartphones is growing rapidly across the world, and the tech giant’s upcoming iPhone 6 will have bigger screens. The iPhone 6 will arrive in September in two versions, 4.7-inch and 5.5-inch.

Given the huge anticipated demand, Apple Inc. (NASDAQ:AAPL) [stockdata ticker=”AAPL”] has asked its suppliers to produce between 70 million and 80 million units by December 2014, sources familiar with the matter told The Wall Street Journal. The initial order for the iPhone 6 is significantly bigger than last year’s order of between 50 million and 60 million units of the iPhone 5S and 5C.

Both versions of the forthcoming iPhone 6 are speculated to sport a metal casing. These new devices will be available in multiple colors. Sources said that display makers are finding it difficult to increase production of the larger 5.5-inch screen due to the new technology. Apple Inc. (NASDAQ:AAPL) is using in-cell technology for the phablet displays, which integrates the touch sensors with the LCD panel to make the screens thinner and lighter.

Hence, chances are there will be greater failure rates for 5.5-inch displays. Apple Inc. realizes this hiccup, so, the company has asked component manufacturers to prepare for 120 million iPhone 6 units by the year-end. The 5.5-inch display could face another technical difficulty if it comes with sapphire glass, which makes the device scratch-proof.

Apple Inc. is launching the big screen smartphones as its main rival Samsung has started showing signs of sluggishness. A few weeks ago, the Korean company warned that its earnings would decline for the third straight quarter. With each new iPhone launch, Apple Inc. (NASDAQ:AAPL) faces a balancing dilemma. The company has to ensure that it has enough supplies to meet the holiday season demand. Supply shortages could benefit rivals. At the same time, too much inventory could be a big concern.