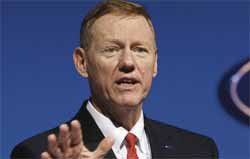 Investors, analysts, and media sources continue to debate who the “best” choice for the next Microsoft (NASDAQ: MSFT) [stockdata ticker=”MSFT”] CEO might be.  Currently, the consensus and “shareholder friendly” choices appears to point to an outsider, Alan Mulally to take on the role.  A current insider could potentially be groomed as an ultimate successor.

Mulally, a native of Washington State and would likely step in and bring his outsider perspective to the business for 3-5 years before the 68 retires in his home state.  If Mulally is not given the nod, shares of Microsoft are likely to appreciate regardless.

What the next CEO will inherit

2)   An opportunity to trim costs.

3)   A consumer business that ANY progress will help the company.

Microsoft has not traditionally been able to monetize its software offerings in emerging markets like China, but the strong uptake of Office 364 and Azure over the last six months broadly and the early customer wins in China (Coke, Siemens, Bosch and Samsung China) illustrate how the move to cloud-based services could help open up new opportunities in emerging markets.  The Chinese cloud market is estimated to be a $4 billion market by 2020.

While Microsoft has made some progress on spending over the past few years, there is still significant room for improvement when looking at the company’s G&A as a percentage of revenue.  Currently, the company’s G&A margins remain above other mega-cap software peers at roughly 6% compared to Oracle’s roughly 2.2% and SAP’s approximate 4.5%.

Consumer segment: can only go up from here

Almost any progress on the consumer business could lead to some potential upside in the company’s bottom line.  If the company can stabilize spending and see modest success in the consumer market, the upside thesis that very few investors believed to be possible can play out over the coming years.

The Xbox is a part of Microsoft’s strategy to gain a dominating presence in consumer’s living rooms.  The company could continue on its integration between Xbox and other devices such as pausing a game on the Xbox and continue playing on a Windows Mobile device.  Achieving the “holy grail” of dominating the living room would help build the company’s brand recognition among consumers.

An insider will in some respects have even more pressure to “shake things up” so investors could anticipate a near-term pressure on the stock if Mulally proves not to be the company’s next chief.  Regardless, over the longer term, incremental growth in the commercial and consumer businesses, coupled with an improving cost structure could prove to be sufficient to keep the stock on an upward trajectory.

Throughout his career Jayson Derrick has consulted and worked with several international hedge funds and most recently director of research for one of Canada's oldest trading desks. Jayson is a trader at heart but understands the importance of long term investing. Jayson best combines information and data that is used for short term trading and translates this in to long term, actionable investing ideas.