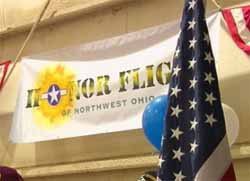 In an audacious move that some have said is a malicious and deliberate attempt to cause as much pain as possible, government officials have threatened to arrest World War II veterans who are participating in an “Honor Flight” to the national Mall.

Since the unveiling of the World War II Memorial, a group has consistently flown World War II veterans, who are becoming fewer in number each day, on a trip to Washington DC to view the memorial at the National Mall. The all-expense paid trip, known as an “Honor Flight” is intended to help veterans find closure over the death of many of their friends during the horrific conflict.

However yesterday when the federal government began its first day of a shutdown, which began following the refusal of Democrats to negotiate with Republicans over a continuing resolution to fund the government, park officials announced that the National Mall would be closed to tourists and barricaded it off. This was done despite the fact that the mall, which contains such things as the Jefferson Memorial is completely outdoors and available to the public to simply stroll along while viewing the memorials.

The White House as well as the Department of the Interior rejected a request from Rep. Steven Palazzo’s office to permit World War II veterans to visit the World War II Memorial.

However, the veterans who were not afraid to face the Hun hordes of Adolf Hitler along with the fanatical Japanese warriors of Tojo were not about to be deterred by some bureaucratic decision made by an individual sitting in some government office.

Palazzo helped the veterans commit an act of civil disobedience against the Park service, when the heroes stormed through barricades around the close Memorial.

“We got the heads up that they will be barricaded and specifically asked for an exception for these heroes,” Palazzo told The Daily Caller. “We were denied and told, ‘It’s a government shutdown, what do you expect?’ when we contacted the liaison for the White House.”

Honor Flight of Northwest Ohio President Lee Armstrong told NorthwestOhio.com that they were not about to let bureaucrats prevent them from seeing the Memorial.

“The Germans and the Japanese couldn’t contain us. They weren’t going to let barriers contain them today. They wanted to see their memorial,” says Armstrong.

Amazingly, Armstrong said when he contacted Park officials they told him the veterans could be arrested if they went to view the Memorial

Armstrong says, “I said, are you kidding me? You’re going to arrest a 90/91-year-old veteran from seeing his memorial? If it wasn’t for them it wouldn’t be there. She said, ‘That’s correct sir.'”