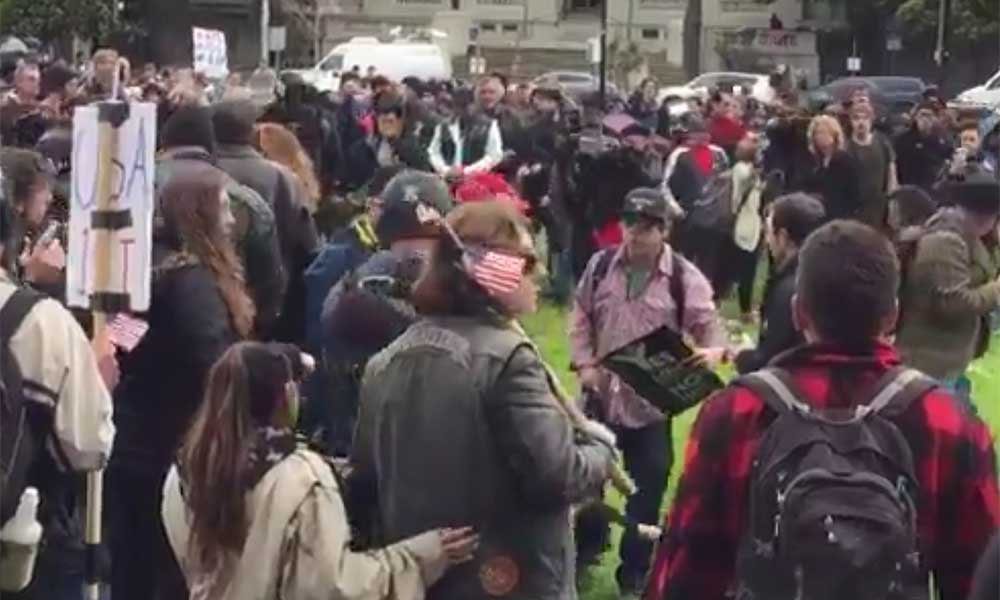 On Saturday, supporters of the president and anti-Trump protesters clashed violently in Berkeley, Calif., on a day that numerous pro-Trump rallies took place across the country. The planned “March 4 Trump” demonstration held at the city’s Martin Luther King Jr. Civic Center Park — several blocks from the University of California at Berkeley campus, escalated after fights broke out between those who had shown up for the event and counter-protesters, which led to at least 10 arrests. Police said that seven people received medical attention for injuries, but none needed or wanted to be taken to the hospital.

Photos and video from the afternoon showed police outfitted in riot gear, as shouting matches erupted within the crowd of a few hundred people, according to police. People could be seen kicking and hitting one another, either with their bare hands or with the signs they had been carrying.

According to Berkeley police, five persons were arrested for battery, four for assault with a deadly weapon (including one person who had a dagger) and one for resisting arrest. Among the items confiscated from the crowd were metal pipes, baseball bats, two-by-four blocks of wood and bricks, police added.

Throughout the afternoon, images of the Berkeley clashes circulated on social media. At one point, Berkeley police released an alert to quash a rumor spreading online that someone had died of a stab wound at the rally.

The situation was further complicated when groups of self-described anarchists joined the crowd around 3 p.m., the San Francisco Chronicle reported. The anarchists were dressed in black and blocked traffic as they marched through downtown Berkeley, mingling with pro-Trump and anti-Trump demonstrators, according to the newspaper.

The protests reached such a pitch that the campus was placed on lockdown and Yiannopoulos’s talk was canceled.

“These people just want to fight,” Nancy Chase, a Trump supporter, told the Chronicle. “They are anarchists in black, and it’s not what we are about. I just want to stand up for liberty.”

These groups take “advantage of the legitimate protesters to destroy things and emphasize their anarchist roots,” David Gomez, a former senior FBI counterterrorism official in Seattle, told The Post.

The anarchists are here, and so is one woman who had gotten aggressive with the mace. pic.twitter.com/Moxbm4gsiW

“This is a sad day,” Berkeley Councilman Ben Bartlett said, according to the newspaper. “We’re better than this.”

Police encouraged people to report crimes even after the event ended.

“Because of the nature of the crowd, police are not always able to make immediate arrests without inciting further violence or injuring peaceful bystanders,” police said in a statement.

The liberal Northern California city has seen its share of intense demonstrations, most recently last month, when Milo Yiannopoulos, then a writer for Breitbart, was scheduled to speak at U.C. Berkeley on February 1. According to the Daily Californian Hundreds protested his presence on campus, allegedly setting off fireworks, throwing rocks and bricks and breaking windows.