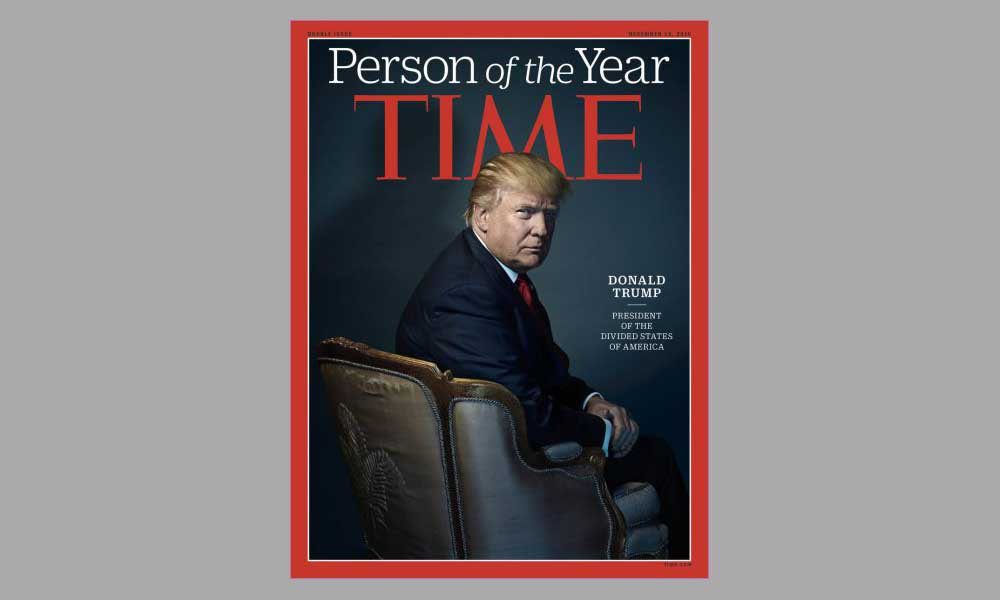 TIME’s ‘Person of the Year’ is Donald Trump

TIME magazine’s editors have named President-elect Donald Trump as ‘Person of the Year’ for 2016. It’s a fitting end to a year for Trump, since he has been dominating TV screens and front pages, for quite some time.

The annual cover on which the magazine recognizes the person who “for better or for worse … has done the most to influence the events of the year” pictures the president-elect in his New York tower with the headline, ‘Donald Trump: President of the Divided States of America.’

Editor-in-chief Nancy Gibbs, wrote in the issue: “So which is it this year: better or worse? The challenge for Donald Trump is how profoundly the country disagrees about the answer.”

“It’s hard to measure the scale of his disruption … For reminding America that demagoguery feeds on despair and that truth is only as powerful as the trust in those who speak it, for empowering a hidden electorate by mainstreaming its furies and live-streaming its fears, and for framing tomorrow’s political culture by demolishing yesterday’s, Donald Trump is Time’s 2016 person of the year.”

Former Managing Editor Walter Isaacson wrote in the 1998 issue that the title goes to “the person or persons who most affected the news and our lives, for good or ill, and embodied what was important about the year, for better or for worse,” TIME’s ‘Person of the Year’ doesn’t necessarily have to be a hero –Adolf Hitler, for example, was Person of the Year in 1938, with a cover showing him playing an organ and a cover line which read, “From the unholy organist, a hymn of hate.” Stalin was chosen twice, while the selection of Iran’s Ayatullah Khomeini in 1979, when the magazine called him “the mystic who lit the fires of hatred.” Aome choices have been ambiguous; for example, Newt Gingrich, who was considered a hero to some and a menace to others.

In an interview accompanying the cover of the magazine, Trump said he does not believe Russia interfered in the election, and defended his claim of widespread illegal voting, and reiterated that despite his wealth, he represents “the workers of the world, who love me”.

But TIME Magazine’s editors don’t get to make the final decision on their own—with the use of online polling, the magazine also invites readers to submit their nominees for who they think has earned the title. Before the Internet, readers were invited to weigh in by mail, with their suggestions, often filling the letters-to-the-editor page in the weeks before the announcement.