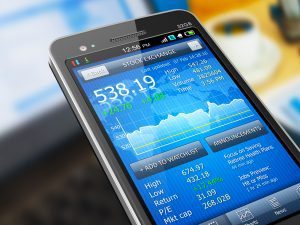 Now that the Dow Jones Industrial Average seems to be racking up records almost every single week (before dropping), it’s natural for market players to start thinking of the next phase in the market. The next phase is no surprise. We’re talking about a correction. What’s left to be determined is the type of correction. We’ve had corrections that led to the market hitting new highs. We’ve also had corrections that led to sustained losses over a long period of time. Considering the many different risks at play in 2015, it’s becoming increasingly clear that the former might not pan out.

Thanks to the current currency devaluations going on in both Japan and Eurozone as well as the continuing slump in the price of oil, it may seem that if there is turbulence in the markets up ahead, central banks might not have that many tools at their disposal to deal with such challenges effectively.
One key area that should be a cause for concern is the crazy valuations of tech stocks. Whether we’re talking about Twitter, which has yet to show a profit, or Facebook, which is trading at a crazy valuation as far as its profits are concerned, tech stocks might be the trigger point that can send the broader market into a tailspin. Here are three signs tech stocks might trigger the next market collapse.
Crazy valuations
It’s very easy to think that the market for tech stocks, whether they be Internet stocks, social media companies, or mobile app companies have fundamentally changed. After all, many venture firms are always looking for actual revenue before they back a technology company. Don’t be fooled. A lot of stocks in the NASDAQ ranging from Twitter (NYSE:TWTR) to Zynga (NASDAQ:ZNGA)  aren’t making any money. A lot of these companies, unless do something drastic, are eventually going to run out of cash. Maybe they will get acquired in the future or a fresh round of financing. No one knows for sure.
Not surprisingly, most of their valuations are future-oriented. It’s all about buzz and hype. The market only values them because of the possibility that they will make money at some point in the future. This is hardly a recipe for success.
Weak underlying performance
Even if we were to buy into the hype and the buzz of potential growth in the future, you have to understand that the tech space is actually very segmented, and these segments can easily be dominated by existing large companies. For example, in cloud computing, it’s very sexy right now for mobile companies to hype up cloud computing and all its potential, but the reality is that there is already an 800-pound gorilla in the room, and it’s called Microsoft. Amazon is not far behind. These companies have the finances and the infrastructure to dominate truly a lot of these smaller tech niches that are popping up primarily around mobile technology.
High ratio of unprofitable companies compared to profitable companies
If you are going to take a survey of tech companies that are actually in the black compared to public tech companies that are in the red, the ratio can be quite disturbing. While it’s easy to get excited about the NASDAQ performance, it actually masks serious underperformance of unprofitable companies. Companies like Zynga are more common than you think.
Don’t take your eyes off tech when gauging short- to mid-term stock market outlook. Any particularly harsh surprises here might trigger the Big One.
Continue Reading
You may also like...

Is U.S. Growth Strong Enough to Pull the Rest of the World Up?
Kaisa Default Highlights Chinese Housing Financing Risks