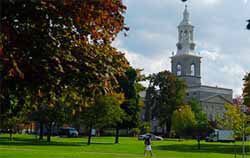 A team of researchers from the University of Buffalo is developing a computer network that would work under the deep sea. The submerged wireless network could have many impressive and helpful uses that would benefit more people in land. That is because once it is developed, it would significantly improve current technologies for offshore natural gas and oil exploration, tsunami detection, water pollution monitoring, and under the sea surveillance.

According to the project’s lead researcher, Tommaso Melodia, the underwater Internet that his team is developing would render unprecedented capacity for collection and analysis of real-time information from the oceans. Moreover, the information to be generated would be made available to just about anyone who is online through a PC or a smartphone. This way, the proposed network would be most helpful in giving more warnings about tsunami or other disaster types originating from the sea.

The project is planned to develop a framework that would facilitate transmission of information from existing and proposed underwater sensory networks directly to smartphones, laptops, and many other wireless devices. At the same time, it could possibly facilitate connection between underwater communication systems around the globe. Thus, it would logically create a wide deep-sea Internet.

But that is not all about it. Land-based networks of wireless communications use radio waves. But those would not be possibly used underwater. That is why the project is aiming to utilize sound wave-based modes of communication under the ocean. That mode of underwater communication was already devised and is being used by the Navy and National Oceanic and Atmospheric Administration (NOAA).

NOAA now uses acoustic waves to transmit data coming from tsunami sensors across the ocean floor to available surface buoys. Those buoys then convert those acoustic waves into useful radio waves that could be transmitted to land-based systems.

The proposed underwater network would link buoy networks used for tsunami detection to each other. In effect, doing so would result to more reliable alerts or warnings. It could also help collect oceanographic and pollution information to encourage researchers to work collectively and drop duplicate sensors and other tools.

Other than the proposed uses, the undersea network would also aid law enforcers as they search for illegal activities that are possibly carried out under the sea. Those may include drug smuggling tasks that are done using makeshift submarines.