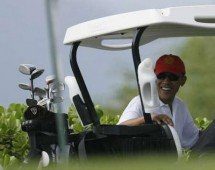 President Obama and the First Family left a $16 million tab for taxpayers to pick up for flight expenses on just two trips last year alone.

According to Air Force documents obtained by Judicial Watch via a Freedom of Information Act request, the Obama family’s vacations to Africa in June and July, as well as the family’s Christmas vacation to Honolulu, cost taxpayers an exorbitant amount of money.

Judicial Watch notes that Obama’s 2013-2014 vacation ended up costing $3 million more than the Honolulu trip that took place a year prior.

This report by the Judicial Watch comes just after another report by the National Taxpayers Union that claims that President Obama is the most internationally traveled president in his first five years.

The NTU has calculated that President Obama has taken 31 international trips for a total of 119 days abroad.

This tally does not even include the president’s copious fundraising trips and vacations around the country. Many have commented on Obama’s love of golfing in Florida, as he has seemingly ignored his duties as president and spent time on the fairway on multiple occasions. The most recent golfing vacation that Obama took was only about a month ago, when he spent time in the Florida Keys with his wife and children instead of dealing with Russia’s invasion of Crimea.

Former Speaker of the House Newt Gingrich commented on the president’s Key West vacation, saying “A lot of people are criticizing him for going to Key Largo. The president spent all last week proving that he was capable of being as ineffective in Key Largo as he is in the White House.”

“The costs to taxpayers of President Obama’s travel, especially his luxury vacation travel, are beyond the pale, and the secrecy surrounding these costs shows that Obama’s vows of transparency are rubbish,” said Judicial Watch President Tom Fitton.

During his campaign in 2008, then Senator Obama promised that his administration would strive to be as open and transparent as possible. This promise turned out to be an abject lie, as the Obama administration has been incredibly secretive and unforthcoming about internal affairs and expenses.