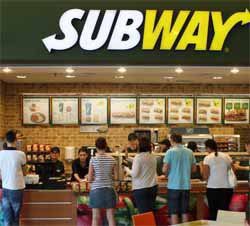 Subway Restaurants has surpassed McDonald’s to have the most restaurants, according to reports. The fast food chain, which promotes healthy eating and helping shrink the waistline, has 39,747 locations in 101 countries compared to McDonald’s more than 34,000 in 119 countries.

Nine years ago Subway passed McDonald’s as the largest quick serve chain store-wise because of Subway locations in Wal-Mart stores, truck stops, gas stations, and other locations. However, the chain has fewer locations — slightly more than 200 — in China at this point.  According to a business plan filed by the company, Subway had plans to double their initial totals in 2011 and end up with more than 400 locations in the country by the conclusion of 2014, which according to the report, would make them the largest fast food chain in China. Despite owning more stores, Subway doesn’t compare to McDonald’s as far as money goes. McDonald’s brought in $24 billion last year compared to Subway’s $15.2 billion.

During the first quarter of the year, Subway passed McDonald’s as the most popular lunch spot for workers, according to Certify, which is an expense report software management company. The numbers were based on 1.96 million U.S. expense receipts that were filed during the first three months of the year.

In the U.S., Subway has about 25,870 restaurants compared to McDonald’s 14,160. Even with more locations it has taken the sandwich chain a while to get in the lead. All throughout 2012 Subway had ranked second for working lunches behind McDonald’s with Starbucks and Panera Bread coming in behind them.

Certify has identified the to 10 lunch spots for business travelers, while some restaurants are more popular for group meals than others. Chick-Fil-A and Panera Bread are more popular among business groups, according to the reports, which is obvious from the average tickets being much more expensive.