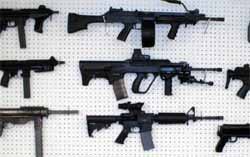 Guns have been used as a political football off and on over the years, though there seems to be a pesky little Constitutional item called the Second Amendment. And it seems that guns have become part of the national political conversation much more often over the past year since a series of mass shootings, which started with the tragic classroom massacre at Sandy Hook Elementary School in Newtown, Connecticut.

What has been so interesting has been the series of stories that have come out recently that seem to focus on one side of the gun debate. A couple of prominent examples surrounding the recent Washington Navy Yard shooting. There was a story that emphasized politicians (Mainly Democrats in Congress) who wanted to use the Navy Yard shooting as a rationale for banning the AR-15, based on initial rumors that the firearm was used in the shooting.

Except for one minor detail – the AR-15 was not used in the shooting, as revealed in the investigation of the case. Whoops. It turns out, the shooter in that incident actually used a shotgun – which was the weapon that Vice President Biden had publicly noted would be his weapon of choice, as he was quoted as saying that he advised his wife to use a shotgun and shoot it outside of the house to deter possible criminal activity at his home in Delaware. So to regulate that shotgun because of the Navy Yard shooting would mean forbidding the Biden family’s weapon of protection. So what would Joe and Jill do?

All of this talk has led to the belief that getting rid of all guns, or most guns, will actually lower gun crime in the country. However, several researchers have noted recently that every one of the mass shootings in the last several years – with the one exception being the 2010 Tucson, Ariz., shooting that involved former Rep. Gabrielle Giffords (D-Ariz.), who refused a security detail during her appearance – were conducted in “gun-free” zones. So, no guns were allowed on those premises, and yet multiple people were shot, wounded and killed?

Then, the latest interesting argument came from a study at Harvard University, which recently reported that there was evidence to suggest that more guns in society would actually reduce crime involving guns. And this might be deduced from crime rates in places where there are conceal-carry laws, and noting the very high violent crime rates in cities with very stringent gun controls – such as Chicago, New York and Washington, D.C., as examples.

Chances are, despite the best efforts to be reasonable, gun control will continue to be in the national debate as long as these mass shootings continue.