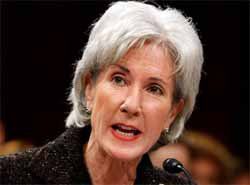 Americans who are having problems signing up for Obamacare due to government problems with the website, and now face the possibility of an insurance coverage gap, have received a harsh message from Health and Human Services Director Kathleen Sebelius, “get in line.”

The Detroit Free Press reported how Sebelius made a trip to the bankrupt city to reassure Michiganders that Obamacare was up and running and encouraged them to sign up for coverage. The visit was also intended to reassure state residents who are wanting Medicaid coverage, which is free, but find themselves stuck in the system where they are not sure if they qualify for it or not, that the federal government will work with them.

As part of the state’s health reform, Michigan is expanding its Medicaid program to expand coverage to another 470,000 state residents. However, the problem is those desiring Medicaid coverage have discovered the applications are not ready for the newly eligible residents. This lack of proper forms is causing anxiety for some who fear they will not be able to sign up by the April 1 deadline.

Sebelius said that there is only so much an individual can do before they then have to simply sit back and let the government process the information and let the system work as promised.

For consumers, the first step is to go to the website and enroll for coverage or call the national call center. However, the enrollment process has been plagued with problems since it first launched in October. There have been widespread reports of security concerns with both the website itself and the individuals taking down the customer’s information. Sebelius admitted under testimony before Congress that there was no requirement for a background check for anyone working to enroll people. This leaves open the possibility of convicted felons getting access to personal information such as a person’s social security number and credit card information.

Sebelius said while a person might sign up at the Healthcare.gov website or at the call center; ultimately it is the state’s responsibility to make sure the system works.

“There’s nothing people can do but kind of get in line,” she said.

Michigan Secretary of State Terri Lynn Land said she was “offended” that Sebelius would say applicants need to “get in line” if they want health insurance coverage.

“More than 225,000 families in Michigan lost their insurance because of Obamacare, and countless more are worried about how they are going to cope without being fined. People have been waiting in line for months, from the broken website to the over-loaded call centers, and now this. When will … the Obama Administration realize their law just doesn’t work?” she said, in a statement.