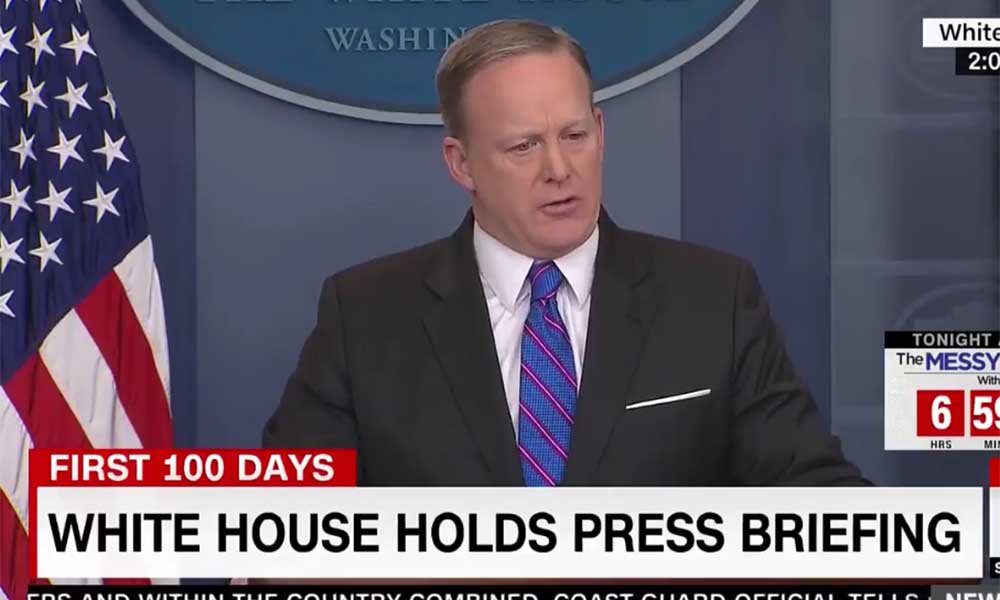 On Wednesday, White House Press Secretary Sean Spice expressed his concern about Wikileaks’ release of documents allegedly revealing CIA surveillance techniques, and then quickly muddled his message. He connected the latest WikiLeaks document dump to surveillance efforts under the Obama administration, days after President Trump’s publicly made his unsubstantiated claim that former President Barack Obama tapped his phones during the 2016 presidential campaign. Then, he argued that there was a “double standard” when it comes to the level of outrage elicited by different leaks.

The White House has repeatedly argued that too much public and political attention has been devoted to the investigation into contacts between Trump campaign officials and suspected Russian operatives and not enough to the leaks of that confidential information.

“It’s interesting how there’s sort of a double standard with when the leaks occur, how much outrage there is,” he said.

Spicer’s comments came as he relayed Trump’s “concern” about the leaks and said Americans should be “outraged” by the release of classified information.

“This is the kind of disclosure that undermines our country, our security and our well-being,” Spicer said.

Spicer’s claims on Wednesday came as he faced questions about a double standard on the President’s part in condemning this leak while at the same time, he praised WikiLeaks’ publication of emails related to his rival Hillary Clinton during the 2016 campaign.

Spicer said that there is a “massive, massive difference” between the two disclosures.

“There is a big difference between disclosing Podesta — John Podesta”s Gmail accounts about a back-and-forth and his undermining of Hillary Clinton and his thoughts on her on a personal nature, and the leaking of classified information,” he said.

During the campaign, Trump repeatedly lauded WikiLeaks for releasing emails hacked from Clinton campaign chairman John Podesta’s email account, several of which cast Clinton in an unfavorable light. The US intelligence community concluded those emails were hacked and released to WikiLeaks by Russian sources as part of a campaign to hurt Clinton. However, Trump’s comments about hacking when he was on the campaign trail weren’t limited to praising of WikiLeaks, which has engaged in publishing classified national security information since 2006, and its dump of Clinton emails.

Trump also applauded the hack of the Democratic National Committee and downplayed the seriousness of the various election-related hacks, at one point urging Russia to find and release the 33,000 emails allegedly deleted from the private email server Clinton used while she was  secretary of state.