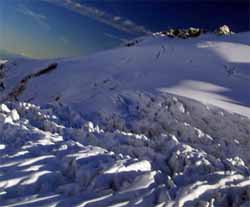 Critics of those who claim that man-made global warming is a serious threat to the planet and settled science frequently point to the fickleness of scientists on the issue, noting that in the 60s and 70s scientists were warning of just the opposite. It now appears the critic’s claims may have merit as a new consensus is beginning to once again return to the global cooling model.

Adherents of man-made global warming have supported the issue in a way akin to that of religious zealots, even to the point of attempting to cover up evidence that runs contrary to their beliefs or portrays it in a negative light.

Global warming has been blamed for every recent catastrophe including wildfires in America even when they have been started by human activity, Hurricane Sandy, and even for the recent rash of cold spells that have descended upon much of the world.

However, even in the midst of their support for the theory, they appear to have acknowledged there are serious issues with claiming that record cold winters are the result of global warming. In the 1990s, they frequently made calls for governments to take steps to issue regulations to curtail “global warming.” However, they now generally do not use the phrase any longer, instead calling on combating “climate change.”

It is unclear exactly how that is supposed to happen since the very definition itself means that if the weather changes from one day to the next that is climate change.

However, scientists are now beginning to rethink their climate change models and are seriously discussing the possibility the earth is entering into a period of global cooling.

Environmentalist Lawrence Solomon writing in the Financial Post cites the fact that solar activity is currently decreasing at one of the fastest rates as anytime the last 10,000 years. Because of this, he says many scientists are actually reverting from the mantra of global warming and are now subscribing to the possibility of global cooling as occurring.

“Now an increasing number of scientists are swinging back to the thinking of the 1960s and 1970s,” Solomon writes. “The global cooling hypothesis may have been right after all, they say. Earth may be entering a new Little Ice Age.”

He further goes on to note that Columbia University’s George Kukla- who warned the US government about the dangers of global cooling back in 1972 claimed that global warming “always precedes an ice age… The warming we saw in the 1980s and 1990s, in other words, was expected all along, much as the calm before the storm.”

One of the public-relations problems facing man-made global warming adherents is that individuals are able to look around and see the effects of increasingly cold weather that they are able to experience personally. Europe and many parts of America have experienced record snowfalls at even later periods in the year in recent years. This causes people to ask if the alarmists are warning about the planet getting warmer, then how can they explain it getting colder.

Rather than blame man-made activity for weather change on the planet, scientists have recently begun looking at solar activity as a predictor of world climate. Data available has revealed that low solar activity has been connected with cold eras in human history, while the opposite has occurred during higher solar activity such as what happened during the recent period form the 1950s to the 1990s.

Evidence of solar activity affecting climate appeared on Mars, when a probe revealed that the planet’s icepack was also experiencing global warming and receding. This prompted skeptics of man-made global warming to mockingly say that it is amazing how our probes are now causing global warming on Mars.