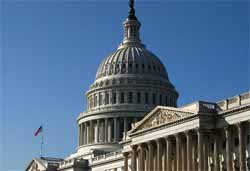 Well, with just minutes to spare, the United States’ credit rating was saved from the cliff, although we had a parachute attached that may or may not work when the cord is pulled.

Congress finally worked out a kick-the-can deal late Wednesday night that re-opened the government until mid-January and allowed the federal government to borrow money until early February. While that sounds like a debt-ceiling was raised for the next three months, that is not exactly true.

In other words, we technically can’t borrow any more money, but the limit will not be enforced until February. The federal government can then borrow as much as it can or wants to until the first week of February, and at that time the ceiling would be reset above the level of the debt at that time.  It’s like the ceiling is still there in our house, but the physical money can’t rise above it, so the government is creating “phantom” money that can go through the ceiling and fill up the attic. Then, in February, the “phantom” cash become real, and the ceiling would have to be raised to hold it all.

As one might expect, this makes certain groups very nervous.

“Suspending the debt ceiling without a dollar amount is further proof that Congress is taking a major step backward in fiscal responsibility,” said David Williams of the Taxpayers Protection Alliance. “A real dollar figure is a constant reminder to taxpayers and Congress that the country is broke. This was done to hide the real debt from taxpayers.”

“A calendar date is not nearly as scary to constituents as a figure in the trillions of dollars,” wrote the Heritage Foundation.

David Woodburn has a professional writing and editing career that spans 20 years and includes coverage of sports, local politics, transportation and economic development issues. He has won state press awards for feature and headline writing, and owns a bachelor's degree in journalism and a master's in English from Northern Arizona University in Flagstaff, Ariz. He has been a freelancer since 2005.