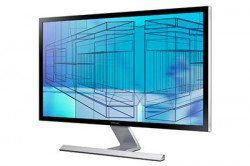 Samsung has announced a trio of new monitors for 2014, including a 4K monitor that’s also capable of displaying a billion colors.

Special features of the UD590 include a Picture-in-Picture 2.0 function that retains the source resolution even when the user moves the content to the smaller frame. A new special feature is Picture-by-Picture, which lets users connect 2 source devices and display them simultaneously via split screen. It also has a “Game Mode” which reduces display lag, improves color, and adjusts the screen’s contrast levels.


Design-wise, the UD590 features a thin metal black and silver bezel with a t-shaped metal stand. It’s equipped with 2 HDMI 1.4 ports and a single DisplayPort.

The UD590 was previously available as a gray-market import from South Korea, but is now officially available for pre-order in the US for an SRP $700.

Samsung has also announced two other monitors that will release near or alongside the UD590 – the SD390 and SD590.

Both monitors will be available in 23.6-and 27-inch sizes, feature Samsung’s PLs panels, and have 1,920 x 1,080 screen resolutions. The SD390 features Samsung’s “Touch of Color” design style with blue-tinted accents as well as a clear stand along with the standard black bezel and base. The SD590 on the other hand looks similar to the aforementioned new flagship model, the UD590.