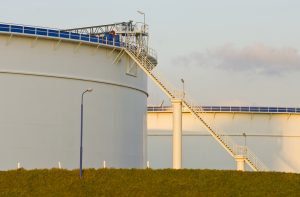 This jaw-dropping number is sure to further drag down the price of oil. Even if the U.S. wanted to consume more oil, it has enough under storage to satisfy local demand. Since the U.S. is the biggest consumer of petroleum products on the planet, this is going to impact the price of oil, at least for the short-term. It is not like the surplus production of O.P.E.C. countries have other destinations. Global demand is slowing down as the rest of the globe’s economies cool down. Even China is slowing down, and it registered its lowest GDP growth rate in over 20 years.
What is the main reason behind the buildup of petroleum in the United States? According to the U.S. Energy Information Administration, refineries are getting ready for their regular maintenance in the coming month. Not surprisingly, this has left a lot of petroleum in storage instead of being refined and released for distribution. American refineries are currently running at 85.5% capacity. This is its lowest capacity level since March of 2013. Expect oil prices to trend lower or remain stable. This is not good news for investors who are long on oil.
Sponsored Links

Is Smaller and Simpler the Future of the American Dream?
Precious Metals Show Exciting Signs