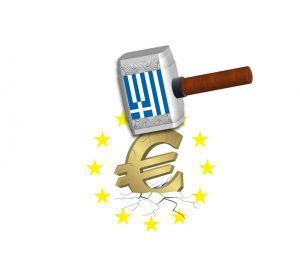 This served to calm the market, and the euro rebounded. While a collective sigh of relief seemed to pervade the market, the reality is that this is a temporary respite. Eventually, all participants in this Greek drama, Germany, Brussels, and Greece, would have to confront political and economic fundamentals.
The euro is built on shaky ground. The Eurozone is composed of 19 different countries who want to hang on to their sovereignty but at the same time share the same money. The problem with this is if you have a country like Greece, with very generous social benefits and a very volatile, increasingly entitled population, relations will always be tense with other economies that are better managed.
It is like living in a dysfunctional family. One family member spends money like a drunken sailor. Another family member works hard, saves a lot of money, and ends up giving all those savings to the profligate relative. It is not going to pan out. Unless these 19 countries give up a big a chunk of their sovereignty for true fiscal discipline, it is not going to happen.
Continue Reading
You may also like...

Are Activist Shareholders Truly Beneficial?
Be Cautious of Dollar-Sensitive Stocks