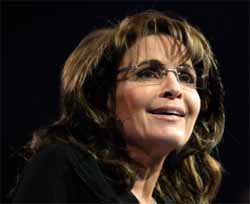 Highlighting the truth that the federal government is taking in more than enough money to meet its obligations and prevent the default from occurring, former Alaska Governor and vice presidential candidate Sarah Palin threw down the gauntlet saying that if the president allows the country to go into default, he should be impeached.

“Defaulting on our national debt is an impeachable offense, and any attempt by President Obama to unilaterally raise the debt limit without Congress is also an impeachable offense,” Palin said in a Facebook post. “A default would also be a shameful lack of leadership, just as mindlessly increasing our debt without trying to rein in spending is a betrayal of our children and grandchildren who will be stuck with the bill.”

As the federal government inches closer to the October 17 deadline for raising the debt ceiling, Obama has attempted to scare the markets by warning them that the government could be in default if the Republicans refuses demands to raise the debt ceiling without conditions.

However, Republican Senators Ron Cruz and Rand Paul as well as economic experts have pointed out there is no danger of a default unless the president were to choose for it to happen.

“I think it’s irresponsible of the president and his men to even talk about default,” Sen. Rand Paul said during an interview on NBC’s Meet the Press. “There’s no reason for us to default. We bring in $250 billion in taxes every month. Our interest payment is $20 billion. Tell me why we would ever default.”

With these figures, it is evident that the government has more than enough money to meet its obligations. Some have compared the analogy to what happens when a family has their credit cards maxed out. Rather than ask for an increase in the credit limit, they look at their budget and find other items to cut such as eating out or entertainment expenses.

If United States were to hit the debt limit ceiling without an increase it would essentially be in the same boat. While the Treasury Department has the authority to prioritize payments to prevent a default, it has indicated it will not do so. When Republicans attempted to pass a bill in an attempt to reassure the markets of United States would in fact prioritize its payment, Obama threatened to veto the bill.

Ultimately, if the debt limit is reached it would essentially restore the budget to Clinton era levels, or a 20% cut in the federal budget.