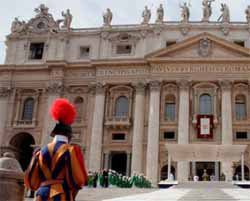 In a highly controversial move, the Obama administration has stirred up another controversy by announcing its plans to shut down the U.S. embassy to the Vatican.

U.S. officials are announcing that the move is not intended to be a slight to America’s Roman Catholics, but instead is being done as a security measure to avoid a repeat of what occurred in Benghazi, Libya where Islamic terrorists attacked the consulate and killed four Americans, including the U.S. ambassador.

Instead, the offices will be moved to the larger American embassy in Italy.

However, regardless of the reasons for the move, critics are saying the move amounts to a slap in the face to Catholics.

Former U.S. Ambassador James Nicholson told the Catholic Reporter that it was a “massive downgrade of U.S- Vatican ties.”

“It’s turning this embassy into a stepchild of the embassy to Italy,” Nicholson said. “The Holy See is a pivot point for international affairs and a major listening post for the United States, and … [it’s] an insult to American Catholics and to the Vatican.”

The issue of whether the United States should maintain ties with the Vatican state has long been a controversial issue.

For many years America did not have a representative to the Vatican on the grounds that the pope is considered the head of a religious institution and that no other denomination has been accorded such a place of pre-eminence. Opposition has come not just from liberal groups, but evangelical Christian groups and Baptists have argued against the idea of having an ambassador for any church.

However, during the Reagan administration, the president decided to officially establish ties with the Holy See. One of the key reasons for his decision was during that time, Pope John Paul II was opposed to communism, and as such a key ally in Regan’s war against Marxists.

The Roman Catholic Church is unique in that it is considered to be not just a church, but also a political organization as well, exercising influence over foreign governments.

Nicholson said the Vatican was a major player in the political arena and the administration’s decision was part of a continuing war against Catholics.

“It’s another manifestation of the antipathy of this administration both to Catholics and to the Vatican — and to Christians in the Middle East,” he said. “This is a key post for intermediation in so many sovereignties but particularly in the Middle East. This is anything but a good time to diminish the stature of this post. To diminish the stature of this post is to diminish its influence.”

Finally, a case to keep our money under our mattresses?
Round Two: Supremes to reconsider Obamacare