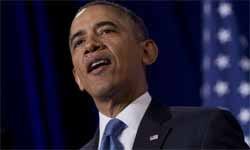 In an interview released by the New Yorker on Sunday, President Obama likened smoking marijuana to smoking cigarettes. He also made the comment that smoking marijuana is not any more dangerous than drinking alcohol.

“As has been well documented, I smoked pot as a kid, and I view it as a bad habit and a vice, not very different from the cigarettes that I smoked as a young person up through a big chunk of my adult life. I don’t think it is more dangerous than alcohol,” said Obama in his interview with the New Yorker.

Obama’s candid interview with the New Yorker is sure to surprise many in the political realm, as comparing marijuana to alcohol has been a debate tactic used by those in favor of marijuana legalization for a long time.

Obama makes it clear that he does not endorse marijuana use in his interview. He discourages his own daughters from using it, and stated, “It’s not something I encourage, and I’ve told my daughters I think it’s a bad idea, a waste of time, not very healthy.”

Contrary to some speculation by political experts, Obama’s justice department has not intervened in Colorado and Washington, which are two states that passed laws allowing the recreational use of marijuana.

Recreational marijuana is still illegal on the federal level, but the Justice Department has backed off of enforcing the law in both of these states. Instead, Obama has urged his Justice Department to focus on incarcerating people who have committed violent offenses as opposed to drug related offenses.

Obama has criticized the massive problem of jail overcrowding, and thinks that backing off of incarcerating people for drug offenses will help to alleviate the burden that the justice system is currently facing.

President Obama did give warning to states that are looking to pass less restrictive marijuana laws, saying that the process can be a slippery slope leading to the acceptance of harder drugs.

Obama noted, “If marijuana is fully legalized and at some point folks say, ‘Well, we can come up with a negotiated dose of cocaine that we can show is not any more harmful than vodka,’ are we open to that? If somebody says, ‘We’ve got a finely calibrated dose of meth, it isn’t going to kill you or rot your teeth,’ are we O.K. with that?”

While Obama has come out as being accepting towards the notion of marijuana legalization, his views on the potential downsides of broadening the notion of what is acceptable behavior in society are understandable. Just because the Justice Department has taken a wait and see approach to states like Colorado and Washington does not mean that any other illegal substances are up for debate.