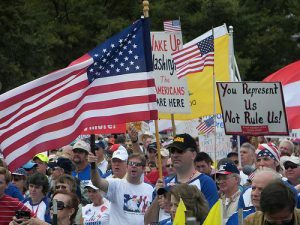 In an exclusive interview last week with TheNew York Times‘ Thomas L. Friedman, President Obama seemed to credit – or to blame – the grassroots conservative movement (read: Tea Party) with the fractious atmosphere in Congress that has stubbornly held the line against the President’s agenda.

The President pointed to immigration as the most recent battleground where the “extreme, maximalist positions” of his opponents have blocked his plans thus far to grant amnesty to nearly six million more illegal immigrants.

In the days and hours ahead of Congress’ usual August recess, House Speaker John Boehner failed to pass an original supplemental appropriations package to deal with the border crisis. When the chips were down, Boehner and his leadership did not reach across the aisle to find common ground on the border crisis with Democrats. Instead, establishment Republicans turned to Tea Party conservatives in order to reach consensus. In the end, the House passed a bill that the Democrat heavy Senate and the President say they will not consider.

At the center of the fracas was Obama’s executive decision, Deferred Action for Childhood Arrivals (DACA,) which grants executive amnesty for illegal immigrant minors. The newest proposals bar him from continuing the program or expanding it to more illegal immigrants should he follow through on the threats he’s been making with regard to continuing and expanding this program.

During the interview Obama said this about congressional gridlock:

“I’ve been speaking in generalities, and trying not to be too political, but that ideological extremism and maximalist position is much more prominent right now in the Republican Party than the Democrats.

Democrats have problems, but overall if you look at the Democratic consensus, it’s a pretty commonsense, mainstream consensus. It’s not a lot of wacky ideological nonsense, the way it is generally fact-based and reason based.

We’re not denying science, we’re not denying climate change, we’re not pretending that somehow having a whole bunch of uninsured people is the American way. We’re doing things that are pretty sensible. I’m optimistic that these things go in cycles, and that the Republican Party will eventually free itself from the grip of this kind of extremist ideology. But it’s necessary to happen soon.”

Texas Senator Ted Cruz, Tea Party darling and rumored 2016 Presidential hopeful, is proud that grassroots conservatives’ extreme and maximalist positions are proving to be a monkey-wrench in the cogs of Obama’s machine. Cruz, at a separate speaking engagement in Iowa, told the crowd that Americans have reason for optimism.

“All across this country, people are waking up,” said Cruz, “and they’re waking up to bring America back to the principles we have been founded on. There is a better way than the path we are on.”

According to Cruz, the way back to those principles is to first regain the majority in Washington, to champion economic growth by pointing to Obama’s failed economic policies, to protect constitutional liberties, and stand up boldly to more to foreign bullies such as President Vladimir Putin of Russia.

As an aside, Cruz suggested overweight Americans try the Obama diet. “Just let Vladimir Putin to eat your lunch every day.”