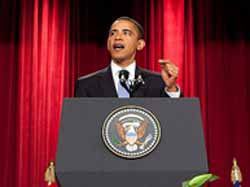 On Sunday night Obama spoke at a fundraiser with some high-profile Democrats. At this fundraiser, Obama strung together a series of laughable statements about politics, Democratic gains in the House of Representatives, and his level of pragmatism. His speech gives rise to a very important question. What dictionary does Obama read from?

“I’m not a particularly ideological person,” stated Obama at a Seattle fundraiser that was attended by the likes of House Minority Leader Nancy Pelosi and Democratic Congressional Campaign Committee Chairman Steve Israel.

If there is one thing Obama can be considered, it’s ideological. His lofty ideas about healthcare reform, immigration reform, and Middle Eastern politics require a very strong ideological core.

Obama continued, “There are things I’m passionate about, but I’m pretty pragmatic as to how we get it.”

If you define practicality and pragmatism as never having to admit that you are wrong or never having to work with others in a constructive manner, you might be reading from the same dictionary as the president.

Being the pragmatic leader he defines himself as, Obama saw it fit to blame Republicans for the blockage of his totally “non-ideological” agenda.

“The biggest barrier and impediment we have right now is the Congress, and in particular the House of Representatives, that is not focused on getting the job done for the American people and is a lot more focused on trying to position themselves [for] the next election,” continued Obama in his speech.

As always, if you don’t agree with Obama, you are not acting in the interests of the American people. Only the president has the ability to push ideology aside and decide what needs to be done to help make the country better. This is a very interesting line of thinking to say the least.

Hypocritical diatribes from the president such as the one espoused on Sunday should not come as a surprise to voters. Apparently you are either on his side, or you are being the ideological one in the debate over policy.

In an added moment of wishful thinking, Obama said, “Our once speaker and soon to be speaker again, Nancy Pelosi.”

This statement is referencing the unlikely notion that the Democratic Party will win back the House of Representatives during the 2014 midterm elections. Democratic chances to win back this part of the legislature are dwindling, as Obama’s approval rating, as well as the approval rating of Obamacare, both plummet.

Obamacare’s implementation has caused Obama’s approval rating to dip below 40% recently. Democrats should be wary of the ticket drag that Obama and his policies may have on the party during the upcoming midterms.

The president’s ability to consistently say such blatantly false things makes one wonder if he really believes that he is not ideological. Who knows? Maybe his understanding of the definitions of common words (such as “ideological”) differs from what the mainstream public thinks. Much like his standpoints on various political issues.