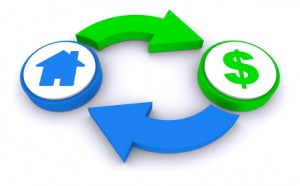 Starting August 4, new reverse mortgage rules will take effect allowing surviving non-borrowing spouses of borrowers who die to remain in their home if they pay taxes, associated fees, and insurance, without the threat of a foreclosure.

As it stands, full repayment of the loan is due upon the death of the borrower. This leaves the surviving spouse not on the mortgage responsible for repaying the debt or selling their home. The new rule will defer payment until after the spouse dies as well.

Using a reverse mortgage, a homeowner aged 62 or older may convert the equity in their home into cash. Rather than making a monthly payment on the loan, the senior instead receives either a lump sum, monthly payments or a line of credit. The loan becomes due with interest upon the death of the borrower, or when the borrower sells the home or moves.

There were 740,000 reverse mortgages across the United States in 2011, according to the Consumer Financial Protection Bureau. This number is expected to grow as more baby boomers become eligible.

In a report issued in 2012, the CFPB found a great deal of confusion among reverse mortgage borrowers as well as some deceptive marketing that led borrowers to believe the loan products were an entitlement program similar to Medicaid.

For several years, lawmakers and consumer advocacy groups have noted a need for protection for non-borrowing spouses, who are often left with nowhere to live after their spouse dies or must move into a nursing home.

This led many couples to take the younger spouse off of the deed for the home to qualify for a larger loan. Unfortunately, this led the surviving spouse to pay the balance or face foreclosure if the person named on the deed died, a situation that was not uncommon.

The new rule will be effective for reverse mortgages made on or after August 4, 2014. It will require the non-borrowing spouse to have been married to the borrower at the time of closing, with no protection for non-borrowers who marry the borrower after closing. The surviving spouse will not be allowed to assume the loan or receive loan proceeds. Lenders will also be required to consider the age of the non-borrower spouse to determine the loan amount.

After a 60-day foreclosure extension notice issued two months ago by the Department of Housing and Urban Development (HUD), the Federal Housing Administration (FHA) has also clarified guidance on reverse mortgage foreclosure timelines.