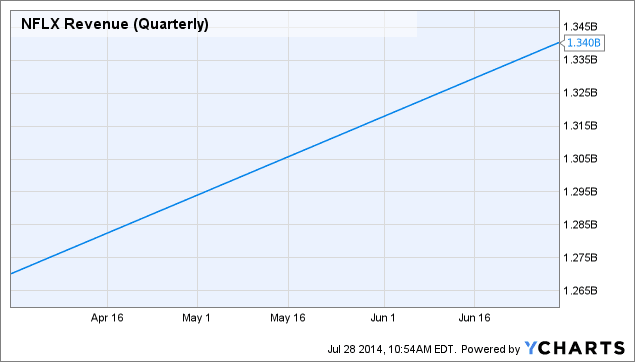 NetFlix recently increased its monthly subscription price hike to $8.99 amid increased costs of paying broadband providers a “fee” to allow its subscribers a smoother streaming experience.

At the end of the second quarter of 2014, NetFlix’s total subscriber base reached reached 50 million. NetFlix announced that its subscriber base from the United States has increased by 22.38 percent this quarter to 35 million against only 28.6 million subscribers a year earlier. In contrast, NetFlix’s international subscriber base grew to 12.9 million from 7.8 million during the same time, representing a 65.38 percent growth.

NetFlix’s cost of content is about to increase a lot this year as the company is expecting to spend around $3 billion for movie rights and original TV shows. This would negatively impact the bottom line of NetFlix regardless of the steady revenue growth. However, NetFlix needs to keep growing its subscriber base in order to justify the massive spending plans to its investors.

How a 24-Year Old Tampa Man Defrauded Apple Inc. (AAPL) out Of $309,768
Amazon.com, Inc. (AMZN) To Invest Another $2 Billion In India To Support Phenomenal Growth