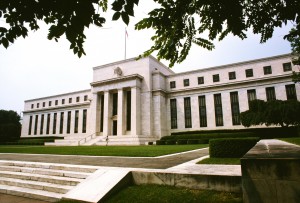 Make no mistake about it-increased interest rates can stifle market rallies and can definitely act as brakes on an overheating economy. When the US Federal Reserve detects that the economy is overheating to the point that inflation has become a threat, it unleashes interest rate increases to cool down rising prices. Thanks to the ongoing recovery in the US, the Fed is worried that, unlike Europe where deflation is a problem, inflation might be on the horizon and threaten the recovery. Not surprisingly, a lot of noise is coming out of some quarters regarding a potential Fed move to raise rates.

The nature of wage inflation
For inflation to pick up, there has to be wage inflation. This means people simply have too much money. When there is too much money floating in the market and the supply of good remain the same, the price of goods go up. Inflation 101. Well, the Fed is worries that as the economy improves and more and more people find themselves working, this can put an upward pressure on inflation. One key element in this equation is the total volume of workers involved.
One of the most alarming facts behind this current recession is the huge number of people that have simply stopped looking for work. They have simply given up finding a job. These aren’t Baby Boomers retiring. Instead, they are prime working age Americans who no longer participate in the job market. Economists like UC Berkeley professor Barry Eichengreen sees labor force participation figures as the key data points the Fed will consider as it weighs interest rates. If the Fed deems that labor force participation rates will remain historically low, then the chances of the Fed raising rates increase. Why? If people don’t return to the job market, labor supply is constrained and wage hike pressures mount. This leads to inflationary pressure.
Continue Reading
You may also like...
Related Topics:Federal Reserve, Jobless, us labor market

US recovery dims as unemployment remains over 300,000 for three weeks
US Dollar Expected to Strengthen On Employment Numbers & Stimulus