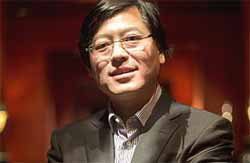 The chief executive of Lenovo Group Ltd. is sharing his annual bonus with his staff. This is an unusual move as it is not very often that it is publicly announced that a CEO is sharing his money with employees located around the globe.  Lenovo recently took over Hewlett-Packard Co. to become the world’s largest producer of personal computers.

A spokeswoman in Hong Kong for Lenovo, Angela Lee, has confirmed that Yang Yuanqing, who also serves as Lenovo’s chairman as well as the company CEO, will share $3.25 million from his bonus with some 10,000 staff members in China and 19 other countries. Lenovo currently maintains dual headquarters in Beijing and in North Carolina’s Triangle Park, the base of IBM’s old PC operations.

Yang reportedly splits his time between the two locations in China and the U.S. According to the company website, the company has more than 30,000 staff worldwide.


Lee said 8,500 to 9,000 of the employees who will receive bonuses are in China while the rest are in the U.S., Japan and 19 other countries. Lee indicated the majority of the bonuses are hourly employees. She noted the extra $300 in a Chinese manufacturing environment makes an impact, especially to employees who are supporting families.

In its annual review during 2012, Lenovo raised Yang’s base pay to $1.2 million and awarded him a $4.2 million discretionary bonus and $8.9 million long-term incentive award. Yang owns 7.12 percent of the company’s shares, which is equal to about $720 million in stock. Lenovo is known for acquiring IBM Corp.’s ThinkPad laptop brand and the rest of its PC business back in 2005.

Since consumers have shifted toward purchasing smartphones and tablets, Lenovo has been improving offerings for those product lines. Because of rapid sales growth, the company became the world’s fourth largest producer for tablets and smartphones during the last quarter. Yang has expressed interest in further growth by acquisition, and the company is rumored to be considering deals with struggling smartphone producers BlackBerry Ltd. and HTC Corp.

Yang is said to have strong ideas for continuing growth for the company. He also believes the company should take responsibility and he feels sharing is bonus is a way to reward employees for making the company successful and for contributing to its strong growth.