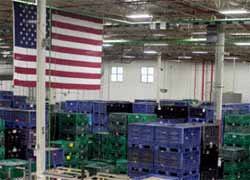 Many manufacturers have moved jobs overseas in the last 15 years. During that time, U.S. exports and the manufacturing sector have seen significant declines. However, that trend seems to be reversing as some companies are bringing jobs home.

Reports indicate the data was driven by America’s increasing oil production along with a commitment from retailers to buy more domestic goods, and other companies bringing their previously offshored jobs back to the U.S. through a trend known as reshoring.

While reshoring is good for the U.S., it is also could result in a positive effect on American companies and their stocks. According to the Wall Street Journal, U.S. manufacturing accounted for 19 percent of global exports during the year 2000. By 2011 that number had shrunk to 11 percent. During that same 11-year time period, manufacturing in China jumped from 7 percent to 21 percent of global exports.

These statistics were very troubling for American factories and their workers. It also had a negative impact on the economy. Many businesses felt it was less expensive to manufacture elsewhere and that the expense of making goods domestically would result in costs too expensive for companies as well as consumers.

At this point, though, the Chinese manufacturing landscape is growing from a cheap labor force to a more expensive and more sophisticated work force that makes technological products that are more expensive. During the second quarter of this year, U.S. exports of manufacturing goods increased by almost 20 percent year over year to $19.9 billion.

Among the companies that have brought jobs back home include Caterpillar (CAT), the heavy machinery manufacturer. After having closed plants and laying off thousands during the depression, the company opened a $200 million plant in Texas during August 2012.

Apple, which has sent many of its manufacturing projects to China, has also pledged to bring back some of its manufacturing to the U.S. Harley Davidson is now more attracted to producing here rather than abroad. The combination of reshoring and constructing new manufacturing facilities in the U.S. could result in the creation of up to 5 million new jobs.

As more and more jobs return to the U.S., the economic outlook is improving. Experts indicate, however, that the great improvement will not occur overnight and just as the jobs left, they will return slowly and in segments. It will then take time for improvements to be seen.