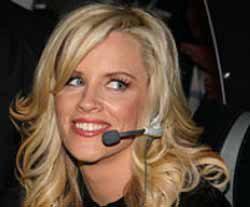 Actress Jenny McCarthy caused headlines again by issuing a statement that she is not against vaccinations for children. The autism activist, model, and comedic actress has been quoted numerous times questioning the safety of vaccinations, and is considered a leading anti-vaccination activist by the general public.

In an article published in the Chicago Sun Times, McCarthy refers to vaccinations as a ‘gray area’ and begins her article by saying she is not anti-vaccine.

McCarthy’s current stance on vaccinations is being heavily challenged by many. In 2008, the James Randi Educational Foundation awarded her the Pigasus Award for ‘Performer Who Has Fooled the Greatest Number of People with the Least Amount of Effort.’  Her most recent statement has been questioned by Time Magazine editor, Jeffrey Kluger, who states in a published opinion piece that he challenges her current anti-vaccine stance.

“…it’s just too late to play cute with the things you’ve said. You are either floridly, loudly, uninformedly antivaccine or you are the most grievously misunderstood celebrity of the modern era.” (Time.com)

McCarthy has been previously quoted suggesting her son’s autism may have been caused by vaccinations. There is currently no research supporting this claim.

Vaccinations do have side effects, but according to the Center for Disease Control, they are generally very mild. The CDC encourages parents to vaccinate in order to reduce the risk of spreading disease. A list of side effects for available United States vaccinations is published on their website.

Jenny McCarthy is a former spokesperson for Talk About Curing Autism, and currently a co host on ABC’s The View.